Living in the Midwest, I consider what life is like in the Rust Belt, where aging manufacturing companies have come and gone. When I first moved to St. Louis, all three of the domestic car makers had plants here: now we are down to just one of them. I was talking to a friend of mine who mentioned that she is seeing something similar: some enterprises are still stuck with their “rust belt” version of IT services and have yet to make their move. Whether their businesses will suffer the same fate as some of the manufacturing industry is hard to say.

So I thought I would talk to another friend of mine, who is the IT director at a Midwest steel mill and get his perspective. He has a small IT shop of six people but they are doing some interesting things to keep their plant competitive. “We can’t really innovate on our product line, but we have to do things from an IT perspective to serve our customers better and become more productive and cost effective,” he told me. Here is how he does it:

Get rid of aging equipment. While he still has a few Windows XP machines around, most of his IT gear is the latest and greatest. He is in the process of upgrading his Cisco network infrastructure, for example. Some of his most ancient computers that run his plant are connected to logic controllers, just because they don’t require much horsepower and they are on the plant floor where the environment is brutal. “Eventually, we will replace these when they break or migrate one of our older office PCs to there.”

Beware of legacy systems. “We were able to leapfrog other steel companies with our technology, because when we started the company we didn’t nave many legacy systems.” Now he has three developers who build custom apps that are used for handling their steel inventory and steel operations, along with a customer portal. For example, his team built a custom automated scheduling system when one of the two people in that department retired. Now it takes the remaining staffer just part of the day to do the scheduling, and they have cut wasted product and improved their steel yields tremendously, saving them money too.

Make use of the cloud and virtualization where it makes sense. “When I started with the company, we had a single PC server that was running everything. Now we have virtual servers and are looking at converged storage infrastructure too.” One of his first decisions was to employ Google Apps for their enterprise email. “That was a slam-dunk and one of the best decisions I ever made.”  He is looking at acquiring other cloud-based apps as well,

Vendor flexibility. Part of moving to the cloud means making use of services that don’t require vendor lock-in “I want to have options to migrate away from them if things don’t work out. That is why I haven’t gotten involved in SAP or Salesforce yet, there isn’t any easy way to walk away from them.”

Segregate production and office networks. As the stories from the German steel mill in December can testify, having totally separated networks between the office and the mill are critical. Hackers used an infected email to literally trash one of the mills. “We have different networks and vLANs so this won’t happen to us.”

Your own rust belt conditions might differ, for example, you might still be using Systems Network Architecture on your mainframes, or connecting via Frame Relay networks. So it might be a good time to reconsider these and other technologies, and start investing in your future. (The building pictured above is from an old automotive plant that has been renovated into condos, by the way.) 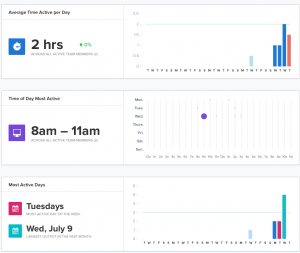 If you are trying to have more effective team communications, you are probably looking at products or services that go by names like “social CRMs” or “team engagement tracking apps.” Regardless of what they are called, these apps can connect to a variety of social networks and email accounts and make it easier to manage your communications, track what your team has posted, understand what other team members are working on and improve workflows and productivity by avoiding interruptions or massive amounts of email.

I tried out two of these tools, Peak (shown above) and Tibbr. Both are browser-based: Tibbr also has mobile and desktop clients. You can read my review in Computerworld here.

A flexible unified communications service for collaborative workgroups that can share files, import and export contacts and calendars from a wide variety of data sources and Web services, including Facebook, LinkedIn, Twitter and Google’s Gmail. Entirely open-source based.

Price: Varies depending on market and number of user accounts
Requirements: Works on a wide variety of browsers and operating systems. We tested it in May 2013.

I wrote this back in April 2012 for ReadWrite.com.

After watching Microsoft lurch towards completion of Windows 8 and trying out a few of its early versions, I am struck by a tremendous sense of déjà vu. It took me some time to figure out why I was feeling this way, and then it hit me: Win 8 is on track to become the OS/2 of its era, and suffer a similar and ignominious fate.

Don’t get me wrong: I was a big OS/2 fanboy. I even wrote a book about OS/2 in the enterprise, which was never published. But I think it is useful to recall the mistakes of computing yesteryear and see if we can try to avoid them in present-day 2012.

Back in the late 1980s, Microsoft worked with operating systems designers at IBM to produce a successor to the venerable DOS. OS/2 attempted to solve a real problem: having only 640 kB of RAM for running your programs. This meant that DOS made it hard to do more than one thing with your PC at any given time. That’s right: we are talking kilobytes, which is about the amount of RAM in your average coffeepot these days.

Back then we had various tricks to run other things in memory, or to extend that meager memory space, but they weren’t easy. But this was all to get around what was the underlying real issue: being able to run multiple programs concurrently and switch easily among them. We take that for granted today, and indeed with the average multiple-monitor desktop rig that looks like it belongs on the desk of an air traffic controller we run dozens of programs and have all sorts of things open at any one time.

By the time OS/2 was finished, which was a long slog as hundreds of coders worked in dozens of cities around the world, it was basically irrelevant. Windows did a much better job of doing multi-tasking anyway. Intel had come out with better chipsets too, and the world had moved on.

All this meant that IBM and Microsoft were serving different masters when they worked on OS/2. No wonder that they had trouble reaching common ground and ending up splitting up, with Microsoft developing Windows and IBM trying to continue to improve OS/2.

Now look at what is going on with Windows 8. It also began its life trying to solve one problem (having the same OS on desktops, tablets, and phones) but really trying to solve something else: how to beat Apple with a better tablet OS. That doesn’t bode well. We have already had the misfire of Vista behind us, an OS that no one could love or care about. All that Vista accomplished was to put XP more firmly in our minds and keep longer on our desktops. Could an OS really serve two masters equally well? Wait a minute, didn’t I just answer that question?

One of OS/2’s problems is that its protected mode was very bad at running legacy apps. Almost none of the DOS apps ran on the first several OS/2 versions. Sound familiar? Win 8 is also having its problems running legacy Windows XP apps too.

When OS/2 was being built, most people were using 8-bit apps and didn’t really care much (unlike the tech writers) about the move towards 16-bit computing. Because of the upgrade, it was hard to find OS/2 drivers for peripherals such as printers. In my book from 1988, I had written, “UNIX has been able to offer just about everything OS/2 intends to offer for more than a year.” Little did I know how Unix would find its way inside the Mac OS and how Linux would take off in subsequent years. Now we are used to the world of 32-bit and having trouble caring about 64-bit apps, and we have issues still finding drivers for 64-bit Windows. Hmm.

Win 8 also has two different personalities, the old style “Start” that it inherited from XP and the new “Metrosexual” button display that seems to have inherited from Windows Mobile. OS/2 started out with a simple text-only task switcher and quickly got a graphical UI that was crude and something that looked like something from a mainframe terminal designer.

As Nokia and Microsoft work on Win 8, they might end up going their separate ways too, with one doing an OS optimized for phones and the other for PCs and tablets.

OS/2 came with communications and database servers built-in, at leas tin the IBM version. But these were ahead of their time. Now most OS’s have full comms and database capabilities. Ironically, one of the hardest challenges that many business app developers have with the iPad is the lack of a built-in database and the APIs to access the same.

So will Win 8 be more like OS/2 or XP in terms of success? The similarities are somewhat chilling. In the perspective of 2020, I’d say yes.

Nimble offers a way to unify and better engage your social network contacts and track your customers and prospects. We tested version 2.0 in February and found lots of great enhancements, including support for Google Plus and Facebook business pages and integrations with leading SMB marketing tools.

There is a free plan and a paid corporate one for $15 per user per month.

TuneUp Utilities – Version 2011 can help speed up your PC with a new collection of tuning features that is powerful yet extremely easy to use.

Make your Windows PC run faster and more reliably with this updated utility program. It can do many common tasks quickly and automatically, and clean up your hard drive and registry settings too.

A flexible unified communications service for collaborative workgroups that can share files, import and export contacts and calendars from a wide variety of data sources and Web services, including Facebook, LinkedIn, and Google’s Gmail. Entirely open-source based.

Price: Begins at $5/user/month for hosted version; $1095/yr for 25 users for server-based software version
Requirements: Works on a wide variety of browsers and operating systems. We tested it on IE 7, Firefox 3 and Mac Safari 4 in October 2009.