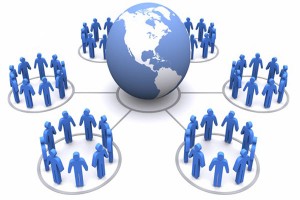 Those of you who have been loyal readers of my work over the years will recognize a consistent theme where I talk about how we use computers to collaborate on projects. I came to work this morning to hear several complaints via IM from a friend who has an evil co-worker that was berating her about her ideas. “What a way to say good morning,” said my friend to me. That got me thinking.

We have come a long way on the route towards better collaboration, with fancier tools, higher-speed networks, and near ubiquitous Internet access, but the people part of the equation is still somewhat lacking. Let’s take a trip down memory lane and I’ll point out some of the things that I have seen over the years.

My most recent column on collaboration describes the British crypto program Colossus and how thousands of people worked over several years to decode German dispatches during World War II. That was collaboration with a capital C. The equipment was barely functional, and the workflows to get the job done were brutally complex. But it worked, because everyone pulled together and did their part and respected the individual roles that each had to play. So this is noteworthy because of the time period and the level of actual collaboration that took place.

But Colossus happened with everyone working in very close quarters, dictated by the wartime requirements and how the machine was constructed. In the modern era, we are more concerned about incorporating collaboration when we have distributed work teams. I had to deal with this early on, when in 1990 I founded Network Computing magazine and we hired the best editors from all around the country. Back then it was a challenge, especially as we had to build trust and help foster a sense of purpose with people that had never met face-to-face.

This is still an issue today. In this recent post for WPCurve, Don Virgillito talks about what he has seen from the best collaborative teams that were distributed geographically. He suggests that you should “consider existing remote work experience as an essential skill.” And you’ll also “have to grow as a team to continue being a team, which would involve meetings, team training, retreats to boost morale, and real-life meetings when possible to build long lasting relationships.” That is exactly what we did back in the early 1990s, and it worked so well that the magazine continued using some of these practices long after I left its helm.

As far back as 2008, I was writing about this people side of collaboration:

So, as PC processors get faster, disks get bigger, and our social networks get larger, we still don’t have the perfect collaboration solution. We still think of the data on our hard disks as our own, not our employer’s. Sharing is still for sissies. Until that attitude changes, the headphones will stay firmly stuck in our ears, blocking out the rest of the world around us.

How many of us are still stuck in a similar situation? And as more “bullpen” style office configurations are created, this only worsens the scenario.

If we look closer at the people relationships than the technology, we’ll see a lot more insights into how collaboration happens. That was the subject of this post from 2009 where a survey of collaboration habits found a key staffer way down the food chain was the glue that held things together. He worked closely with all the different stakeholders and pushed for better collaboration between departments, because the bosses of each department didn’t know how to talk to each other. Another part of this survey found that companies should focus on their least communicative employees: if they can bring them up even just slightly at being better communicators they will greatly improve productivity.

Let’s turn to the tools used for collaboration.

In 1990, we didn’t have the Internet, and setting up email meant running our own system that dialed into each of our remote offices to route messages around. IM and cell phones didn’t exist yet, so remote editors had to find payphones and RJ11 jacks for their modems. We spent a lot of time sending large graphics files around on our network because there wasn’t any other way to share them. In many ways, it was the dark ages of collaboration tools.

But as email became successful, it also brought overuse, something that we still wrestle with today. By 2009 we were focused more on cutting down on back-and-forth emails and improving remote access. In an article that I wrote for an IT publication then I talked about the various tools that were available, some of which are still being used today. (A chart that I prepared for my website is woefully outdated, but will give you a picture of what things I was looking at.)

And in this story that I wrote for Baseline magazine in 2011, I looked at other ways that collaboration happens, using screen sharing, document management and workflow management tools. For example at one after-market auto parts chain, installers can get the schematics of the car they are working on at the moment they need them, thanks to a collaboration tool that integrates into their workflow.

Since then, we have all sorts of fancy stuff to use. A recent review last year for Computerworld looks at three of them: Glip, Slingshot, and Flow. While none of the three are perfect, we have come a long way since the early days pre-Web. And if you click on that link above for the WPCurve article, you will see dozens of other suggestions of what the latest startups use for their collaboration technologies.

So yes, the history of collaboration has been one of fits and starts, making some of the same mistakes over again and not really considering the historical context. I hope you find the journey as interesting as I have.

1 thought on “The uneven history of collaboration”