DataCore’s storage virtualization software, SANsymphony-V, maximizes the availability, performance and utilization of disks in data centers large and small.  Use it to manage on-premises storage or build a cloud storage infrastructure.

We looked at version 9 in June 2012 and version 10 in May 2015.
http://www.datacore.com
Pricing: DataCore-authorized solution providers offer packages starting under $10K for a two-node, high-availability environment.
Requirements: Windows Server 2012 R2

Take a look at another screencast review of Datacore’s software-defined storage solution here.

DataCore’s comprehensive storage services stack has long been known for harnessing ultra-fast processors and RAM caches in x86 servers, for superior performance and enterprise-class availability. It now comes in a compact, hyper-converged package that is ideal for transactional databases and mixed workloads. DataCore Virtual SAN software is available for a free 30-day trial. It runs on any hypervisor and your choice of standard servers.

We tested DataCore Virtual SAN in May 2015.

For information on DataCore’s SANsymphony-V Software-defined Storage Platform, check out our other video here.

And for a copy of our white paper on hyper-converged storage, download our paper here.

You might not have seen the news last week from Box, the online storage service. There are two items. First is about Box’s new developer edition, announced at its annual conference. What is significant is that this is the first time, to my knowledge, that a software developer has made it easier to embed its app inside other apps. Let’s see what they did and why it is important.

Many software vendors have spent time developing application programming interfaces or APIs that make it easier for third parties to have access to their apps or data that they collect. These days it is hard to find a vendor that doesn’t offer an API, and Box has done a terrific job with its own APIs to be sure. They have created a developer community of tens of thousands of people who write programs using them.

These programs make it easy to fax a document from within Box via an Internet faxing service, add digital signatures inside a document, make small changes to a document, and so forth. The idea is to manipulate a document that is inside the Box cloud storage system, so that their cloud can become more valuable than the dozens or hundreds of other cloud-based storage providers that are available. Without access to its APIs, a third party has to first move the document out of Box, make these changes, and then move it back to its repository. That takes time and uses computer resources.

But the developer edition turns this notion on its head, or should I say goes inside the Box. What they are trying to do now is allow apps to use a set of Box features, but doing so inside your own app. Instead of accessing APIs so you can manipulate particular documents, you can make use of Box’s security routines, or storage routines, or other basic functionality, so that you don’t need to invent this functionality from scratch for your own particular app. What are some of the features that are offered? According to the announcement, these include: “full text search, content encryption, advanced permissions, secure collaboration, and compliance.” That is a lot of stuff that an independent software developer doesn’t have mess with, which means that new apps could be written more quickly.

On top of the developer edition, Box also announced its own Javascript libraries that anyone can use to get started on coding some of these features, called T3. They had posted a few snippets of code on this website showing you how you can construct a Todo list. While JS frameworks are numerous, this one might be interesting, particularly in light of the developer announcement.

Certainly, online storage is undergoing its own evolutionary moment. Google is now charging a penny a GB per month for near-line storage, promising to retrieve your files in seconds. Of course, they and other cloud providers are (so far) just a repository, and that is the line in the cloud that Box is trying to draw with these announcements.

If it all works out, we’ll see Box become the center of a new universe of apps that can take collaboration to the next level, because the folks at Box have already built a collaboration environment that they use for their own customers. It is gutsy, because a Box-like competitor could make use of these features and out-Box Box (which is one reason that Box will control who has access to its tools for now).

It could backfire: developers are a funny bunch, and many of them like reusing someone else’s code but maybe not to the level that Box requires. It certainly is a different model, and one that will take some getting used to. But the proof is in the pudding, and we’ll see in the coming months if anyone’s code turns out to be noteworthy.

Storage has seen its share of technology changes in recent years, but the most significant breakthrough isn’t higher capacity arrays, it’s the shift to software-defined storage. One of the reasons many enterprises are embracing this new paradigm is that in recent decades, managing storage has been a specialized skill set which has fostered organizational silos among other issues.

In this free e-Book that I wrote for VMware, I explore: 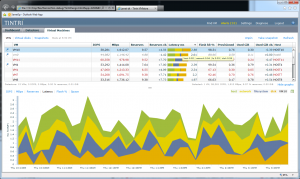 When you have a lot of virtual machines, managing your storage needs and ensuring that your environment is optimized to deliver sufficient performance and reliability is a challenge. VMs can greatly increase storage by several orders of magnitude, and specialized VM storage repositories (such as this one from Tintri, the console shown at left) are needed to keep things under control and increase productivity. There are several interesting directions and technology advances in this market, including so-called storage hypervisor software tools, new storage appliances that are VM-centric, and better storage management features from the traditional ecosystem vendors.

Here is the paper that I wrote on the topic.

A complete disaster recovery appliance that can automate the protection of any any Windows 2003 or later server OSs. We tested v3.2 on a small test network of both physical and virtual machines in December 2011.

Symantec has a new R2 version of its Backup Exec 2010 backup software that is easier to install, quicker to make backups, and a raft of new features that include better support for virtualization, archiving, and deduplication.

SEPATON’s S2100 is a virtual tape library backup appliance that can work to significantly reduce backup completion and restore times and cut down on storage requirements. It has a flexible capacity to hold from 10TB to over 1 PB and a wide collection of policies that can be crafted to particular applications and circumstances.

We tested a unit on a live network with actual production data with Firefox running on Windows XP in March 2010.

The 3X Systems Backup appliance is a great way to automatically backup a collection of PCs and servers across the Internet at reasonable cost.

We tested version 2.1.6 in August 2009 on a small network of Windows clients and servers.
Windows agents available for 2000 and later versions, including both servers and 64-bit OS’s.

Pros:
• Easy to setup and operate
• Simple and effective offsite backups
• Can scale up storage as disk requirements grow