I was talking to a friend of mine who teaches middle school math this week. It brought back all sorts of memories about my career in math, how I picked my classes over my primary and secondary schooling, and what I would tell my teen-aged self with the benefit of hindsight if such self would actually listen to an adult back then. 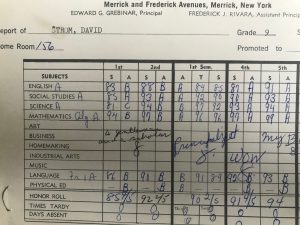 I come from a family of math geeks: my sibs and my parents were all good at math, and all of the kids were on the “math team” that met after school to solve problems and compete for prizes. Looking through my old report cards, rarely did I get a grade less than an A in any of my classes. When it came time for college though, I started out as a physics major, quickly changing to math when I got frustrated with all the prerequisites, and eventually graduating with a roll-my-own major that combined independent study classes in science, art and math.

What many parents don’t realize until their kids have been through middle school is that there is in most districts a separation of kids into two math tracks. One is the basic math curriculum which involves teaching algebra, trig, geometry and some statistics by the time you finish high school. The other is a more advanced series of classes that ends with students taking calculus in their senior year in high school. If you are good at math, you end up with the latter program of study.

Why does anyone need to study calculus? There really isn’t any good reason. It is more custom than necessity. In my case, getting calculus “out of the way early,” (as I look at it now) allowed me to get AP credit and graduate early from college. It also enabled me to take more advanced math classes too. I asked Arnold Seiken, one of my former college math professors, why anyone should take the class. He was mostly bemused by the question: “Calculus was always part of the requirements for graduation – students assume that it is part of the burden of life and just grin and bear it. I assume you took my courses because you liked the jokes. I can’t think of any other reason.” He was right: he was always a crack-up, in class and now in retirement. Interestingly, he told me that he got into math by accident in high school because he couldn’t do the science labs, much like I decided. “Math was a fallback for me, I was always breaking stuff in the labs.” He was an excellent teacher, BTW.

When you are a college math major, there are basically two different career paths you hear about: to teach or to become an actuary. I wasn’t all that excited about teaching (although I did dabble with teaching both a high school computer class and a graduate business class later on in life), and when I took the first exam of many to become an actuary, I got the lowest possible passing score. That first exam is calculus, and my justification for the miserable score was because I hadn’t had any calculus for several years by the time I took the exam. But it didn’t bode well for a career in that field.

But having plenty of math classes – including one on linear algebra taught by Seiken — also enabled me to have a solid foundation for graduate school study of applied math topics that were part of my degree in Operations Research. That took me to DC and to do math modeling for supporting government policy analysis, and eventually on to general business technology. 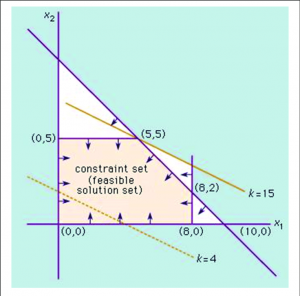 My master’s degree was issued in the late 1970s. Back then we didn’t have personal computers, we didn’t have spreadsheets, we didn’t have data modeling contests like Kaggle. What we did have was a mainframe on campus that you had to program yourself if you wanted to do mathematical models. Today you can use Excel to solve linear programs and other optimization problems, set up Chi Square analyses, run simulations and other things that were unthinkable back when I was in school – not that I would know how to do these things now if you forced me to watch a bunch of videos to relearn them.

Seiken reminded me of a part-time job that I had in college, repairing these ancient geometric string models that were used in the 1800s to teach engineering students how to draw conic sections. I didn’t need calculus to restring the models, although it helped to understand the underlying geometry to figure the string placement. It did get me started on my path towards problem-solving though.

And I think that is what I would tell my teenage self. Whether or not I took this or that math class, what I was good at is solving technical problems. Having a math background made it easier for me to pick a more technical career path. Had I not moved into the calculus track, I probably would still have been interested in math of some kind, but probably wouldn’t have been as challenged to take the advanced classes I was doing as a junior and senior in college. So yes, calculus per se isn’t really relevant to debugging a network protocol stack, or figuring out the root cause of a piece of malware, but it does train you to learn how to pick apart these problems and find your way to an answer. Now, your kids may have a different path towards developing their own problem-solving skills, but math was my ticket and I am glad I took the path that I did.

5 thoughts on “Do you really need to learn calculus?”