Ever wonder why some cyber security firms are constantly in the news? Do they offer a better solution? Know more than their competition? Do the heavy-lifting research that differentiates and substantiates their spokespeople in the minds of the media? Could be.

Or it could be that your spokespeople simply aren’t savvy enough to win media interest. In cyber security, expertise means a lot. But so does the ability to deliver powerful and memorable sound bites on breaking or trending news while empathizing with the interviewer to give the media what it wants (without a sales pitch!). 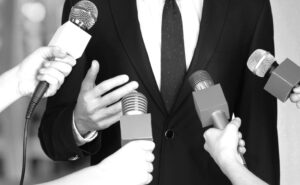 The process begins with carefully selecting your spokesperson and then educating and grooming them to deliver a message that simultaneously entices coverage while still reflecting favorably on the reputation and expertise of your company.

Start with the audience. Are you shooting for general business media or the technical, vertical media? If youâ€™re looking for coverage in the New York Times or on CNN, then you want a spokesperson who can speak at a 30,000-foot level about how an attack or topic impacts a business, family, or person.

The trades? Well, they want someone who can get into the weeds and explain the precise technical shortcomings or trap doors that a hacker or fraudster is exploiting.

Who in your organization could speak to one or both sides of the coin? Make the call and then train them to understand:

1. Media coverage is not about sales or lead gen. Rather, it’s about leveraging third-party credibility to establish thought leadership. Great spokespeople know how to quickly size up the direction of an interview and give the reporter new insights or understandings, information they can’t get elsewhere to propel their stories forward and get them filed and into print.

2. Reporters and producers want interviewees who understand the media rules of engagement. A great interview is a bit like jujitsu. A reporter comes at you from a position or angle. You need to be ready to take the barrage or use the momentum to deflect and disarm. It’s a learned skill, and one that will never be mastered without preparation and training.

3. Media interviews don’t waste time, they leverage it. Thought leaders lead by sharing and engaging with a community. There’s no more powerful way to share and engage than in leveraging the reach and credibility of the media. Building a media presence doesn’t take away from a thought leader’s job. Rather it advances it, along with the goals and objectives of their employer.

4. Charisma counts and it can be learned. Not by our spokespeople, you say? They are too nerdy, too techie. Ironically, there’s nothing wrong with getting your tech on if you’re speaking to the right audience and understand some of the rules of engagement espoused here. A 23-year old nerdy ex-hacker often conveys more authenticity than some slick, paid corporate spokesperson. The key is to harness that nerd-dom and put it work educating and engaging with the media in a real and compelling manner.

5. Sound bites matter. It’s not spin. It’s not hyperbole. The media love short, pitchy sound bites that they can use to convey meaning in a few words instead of paragraphs. “It’s ridiculous that 140 million Americans had their data stolen because a single person failed to install a patch.” You get the point. Develop those sound bites for your spokespeople before each interview and you will dramatically increase the impact of your media coverage.

Some people are naturals at speaking to the media. Most aren’t. But it is a skill your spokespeople can learn and practice before they ever talk to a reporter. The PRCoach website has a bunch of clips illustrating common interview mistakes, and has other helpful resources too. And this document lists the mistakes spokespersons make with consumer media, such as not staying on topic or losing control over the interview, or taking too long to make your point and not speaking in sound bites.

Use these five points as the backbone of their training as you shape them into go-to media sources. And maybe you can develop your own version of such security rockstars as Troy Hunt, Tavis Ormandy (who is from Google), Cris Neckar of Divergent Security and Chris Vickery that are often breaking news and being quoted by the security trade press.