I am almost embarrassed to admit that I have lived in the Central West End neighborhood of St. Louis and never even known about one of the most vibrant college campuses around. I refer to Ranken Technical College, a school that sits just a mile or so from my home and has been operating for more than a century.

We used to refer to these sorts of places as vocational schools, as if they were less than a “real” college. But the tide of perception has turned. As I found out with my tour around campus from the schools’ president Stan Shoun, this is the real future of our city.

The private, non-profit school has more than a dozen different degree programs, spanning things like auto repair, architecture, carpentry, HVAC technology, IT, plumbing, and control systems. Each graduate gets on average five different job offers, and that is where you start to see the difference. Almost everyone is gainfully employed within six months, most getting paid more than $30k a year. The last job fair Ranken held had close to 400 companies recruiting their students, the largest such job fair in the state. That is the kind of college that I would want to go to!

While the school has sat in the same place for more than a century, it is no ivory tower. It is strictly a hands-on place, with the latest equipment for the students to get trained on. Students spent three hours in labs or in the various machine shops for every hour in the classroom. 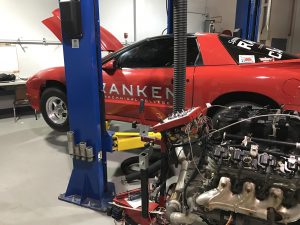 Car companies routinely drop off their latest models for the students to tear apart and put back together. Shoun makes a point of having his own personal car from whatever they have finished working on: his last car took 18 months to get street-legal again, after being totaled in an accident. The auto shop programs are the school’s largest: consider this was “new technology” back 100 years ago. One class works on tuning high-performance engines, as you can see in this photo.

The IT class that I visited was a set of students that had taken their Cisco CCNA exams, which all but one had passed. There were other computer labs scattered around the 23-acre campus, some being used for classes teaching computer-controlled equipment such as you see here for this metalworking rig.

They also learn on these custom workbenches that are built f 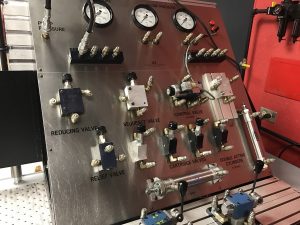 or them: I have no idea what their purpose is, but it sure is impressive.  To top it all off, over the years students have built more than 60 single-family homes that ring the campus. That is probably more new construction than anyplace else nearby of that type. The campus is also growing: Shoun intends to increase the student body over time, as demand for these kinds of skills continues to rise. And he is opening new campuses too: Ranken has expanded to the western St. Louis suburbs to be a nearby GM plant, and another campus is opening about two hours south of the city near another auto parts facility.

And to help keep tuition reasonable, Shoun also is acting CEO on more than a dozen different “microventures,” run by the students. These are real operating businesses that dovetail with the school’s programs: the students get real-world experience so when they graduate they already have some solid skills and abilities. That is really smart, not to mention effective.

Given that many of these kinds of technical jobs are unfilled, Ranken clearly serves a need. I am glad that I stumbled across the place and got to see it first hand. If you would like a tour, I can set you up. You will see the future of St. Louis quite clearly as you walk around their campus.

1 thought on “The future of St. Louis can be found here”