The scene is a deserted office park in Los Angeles after hours. I am driving around, trying to find the spot that my IT manager friend left an envelope for me. Inside the envelope is a disc with a secret IBM software program that is about to give me one heck of a scoop for PC Week, c. 1987.

It has been a week of memories. Last week was the 40th anniversary of the real beginning of the Internet, and this week is the 25 years that PC Week (regrettably now called eWeek) began publishing its weekly commentary on our industry.

While I didn’t start writing for the publication until 1987, I remember those times very well: back in the early 1980s I was working for a private software developer and we were porting our programs from the Apple to the new fangled IBM PC, and trying to make them work. Given that we were charging several thousand dollars to electric utilities for these products, it was my job to do the quality control and make sure that the code was written properly.

I eventually went on to work in various end-user computing departments for government and private industry before getting the job at PC Week as a writer and analyst. I went on to work there for more than three years when the PC industry was rapidly expanding and corporations were buying truckloads of PCs. Back then we didn’t have networks other than the ones that connected our PCs to our IBM mainframes, and I began to specialize in networking and installed the first one in our company before I became a tech journalist.

Wayne Rash called me last month to catch up and get some input on a story that he has written for the publication about those early days. It made me go back and actually find some of the articles that I wrote and recall some fond memories.

For those of you that were born after this year and don’t remember a world without computers, it is worth taking a moment to remind you that we had 80386 computers that had barely more than a megabyte of RAM and ran at 10 MHz clock speeds. Most of the machines back then had character-mode displays (except for Macs, which were rare on corporate desktops) and Windows and Linux hadn’t yet been invented. IBM and Microsoft were working together on OS/2 and Novell’s Netware was the most popular networking operating system because it could run on 80286s and use all of the entire memory of the machine. Hard disks were rarely larger than 20 MB, and floppies had just increased to store 1 MB of data. Mostly academic researchers were using the Internet and few corporations had email, let alone email connections to the outside.

In a story that I wrote in May 1990, I talk about what corporate IT folks need to think about when upgrading to the latest OS – which at the time was Windows 3 or OS/2 1.2. Some of those issues are still with us as we wrestle with Windows 7 and Snow Leopard.

Here are a few memories from that era. You can see scans of various magazine covers and articles that I mentioned from that era here.

My first story for PC Week (Jan 1987) was about a little-known company in the PC-to-mainframe market called Attachmate and how they planned on unseating the then-champion Digital Communications Associates, makers of the popular Irma boards. Attachmate went on years later to purchase DCA, and is still around in the terminal emulation space, also having bought network analysis company NetIQ.

What really got the IBM PC started in corporate computing circles was a spreadsheet called 1-2-3 from upstart Lotus Development Corporation. For some people, it was the only application that they ran on their desktops. Lotus 1-2-3 wasn’t the first spreadsheet and indeed, here is a brief post on the original spreadsheet called Visicalc.

Years before IBM ironically purchased Lotus, they started a skunk works project to use spreadsheets as a front-end to their mainframe databases, something that was very sophisticated at the time. The sole programmer behind the project was Oleg Vishnepolsky who spent about 18 months writing the software simply called S2. The code was used for internal purposes. I spoke to Vishnepolsky last week and rather than be mad at me for blowing his cover he was reminded that when my article ran his status as a lowly programmer was immediately elevated and he got to talk to the big brass about his project. “I got to rub shoulders with people at the top layers of management, and remember this is when IBM had about ten or 12 managers between me and the CEO.” Still, the S2 project was one of the best ones of his career and the code was used by tens of thousands of IBMers.

At the time this was being developed – say 1987 or so – there were a variety of people who were trying to clone 1-2-3 using the exact same command syntax, most notably Adam Osborne. There were legal challenges going back and forth about intellectual property and Osborne, being the roué that he was, only brought more attention to the whole thing.

Somehow, I got a hold of a copy of S2 from one of IBM’s customers, the setting for my cloak and dagger black ops mission at the top of this essay. I wrote the story about S2 and saw Osborne coincidentally a few weeks later at an industry event. Much as I wanted to give him a copy, I didn’t. But you can see the screen caps of S2 that I found in my archives. 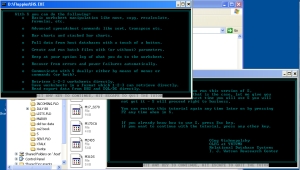 Back then, IBM was very secretive about their new products and had all sorts of established protocols for dealing with the press. One place where they gave out advance information about their plans was at their user group meetings. Since I had come from IT, I knew how easy it was to attend these meetings under somewhat false pretenses. I called up the IT manager for Ziff Davis and found out that we indeed had an IBM mainframe squirreled away in New Jersey. I asked the manager if he could give me their customer number, which is pretty much all you needed to register for the IBM user conference. When I reassured him that it wasn’t going to come out of his budget (some things never change), I signed up and brought home several scoops from the meeting, much to the dismay of my fellow PC Week news hounds. But they were quick learners and when it came time for the next meeting, several of us attended as “Ziff Davis IT managers.” When we came back from the third meeting with even more scoops, Infoworld – which at the time was our main competitor — starting putting together the pieces and called up the president of the user group and got us banned from further meetings. But it was fun while it lasted.

Speaking of fun scoops, one of our younger and more eager reporters was Gina Smith. Gina was out to dinner with her boyfriend (who later married her) at a Cambridge, Mass. Restaurant. Sitting at the next table were two Germans speaking quickly. Little did they know that Smith was fluent in German and as she listened it turned out they were from Lotus’ German office telling each other what the future product plans were for the company. Lotus never knew how we got that story, and Smith went on to write a few books and run a couple of companies in Silicon Valley.

One of my early columns (July 1987) was about how hard it was to use a laptop in a hotel room. Back then modems were the main remote access devices, and they were running at 2400 bps, which was slow enough that you could read the text as it was being transmitted. Most hotels had hard-wired their phones so you couldn’t attach a modem easily, without having to unscrew the wall plates and take out the two wires that you needed to attach the modem to the phone system. How far have we come now with universal wireless everywhere.

Another of my favorite columns (March 1988) was written as if I was Judith Martin, answering questions of network etiquette. I considered it a successful parody when I got a cease and desist letter from Miss Manner’s law firm!

In October 1988, I was promoted to run a major portion of the PC Week. That same week, I was visiting one of my friends, Cheryl Currid, who ran the IT organization of Coke Foods (Minute Maid et al.) in Dallas. One of Cheryl’s staffers had baked a cake in my honor, iced with a simulated cover of PC Week’s front page with various “stories” in icing. Currid went on to write many columns for me at various publications, and is still consulting in the industry.

Yes, those were interesting and fun times. I hope you enjoyed some of these memories too.