Too often in tech I see this where stellar coders (and other technical types) reach the point where they are offered a job as a manager. Do they take the promotion and get the corresponding raise in pay and responsibility? Or stay put and continue to write code? The choice isn’t an easy one. 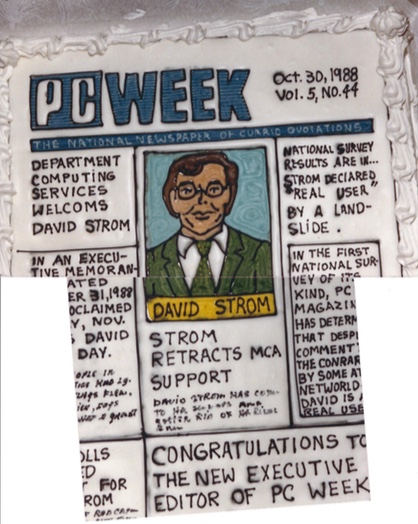 My first big promotion came in my mid-30s, when I was working at PC Week. I had made the move to tech journalism from working in various IT departments, and I was given the chance to run about a third of the magazine’s editorial operations. The promotion required a move from LA to Boston. I can tell you the exact date by a photo of a cake that was baked in my honor by the IT department at Coke Foods, which I happened to be visiting that week. The cake was a copy of a typical front page of the publication. (Sorry about the photos, I had no idea that I was taking them for posterity.)

This promotion was exactly right for me — I went on to run other tech pubs (Network Computing, Tom’s Hardware, various EETimes sister websites, and Inside Security) and work with dozens of editors, artists, and other creative types.

But I came across a more typical situation where the promotion brings about more trouble than success. I was listening to this podcast between Avast CISO Jaya Baloo and Troy Hunt. Hunt has run the site Have I Been Pwned for several years, largely through his own interest in exposing the weaknesses with data breaches. (Note: I have worked with Baloo and write numerous blog posts for Avast.) He mentions how the site got its start when he was promoted to engineering manager at Pfizer and was miserable, because it took him out of the day-to-day coding challenge. While he was getting more influence within the organization, he was also missing out on the joys of coding and building something significant. His dissatisfaction was a good thing for all of us because he has done a bang-up job running HIBP, as it is known. (For those of you unfamiliar with hacker lingo, “pwned” is what hackers do when they succeed at compromising your credentials and break into your system.)

The podcast covers other topics besides Hunt’s promotion. It is worth listening to because it shows the nuanced approach that Hunt has towards running such an influential site, and how he has to play dodge-the-lawyer when he tries to get confirmation that a breach has actually occurred. Still, this is a reminder that not all promotions are always the best directions for our careers. I wish I could send him a cake in appreciation!

2 thoughts on “Should every coder become a manager?”