It isn’t a rhetorical question. We are certainly witnessing a unique moment in social media history and in the evolution or devolution of Twitter. I am gathering my thoughts for an interesting presentation that I have at the end of the week at a local high school entrepreneurship class.

For more than six years, I have been a guest lecturer at a class called Spark that meets at a local disused shopping mall. The topic of these lectures is how to use social media, and in particular Twitter, to promote your new business. I offer some of the spectacular Twit fails (remember Jonathan Schwartz’s resignation from being the CEO of Sun? Remember Sun?) and lessons learned by adults that can apply to the young business-owners-to-be  The students are fascinating as they try to imitate the now iconic Shark Tank pitches. They are largely self-funded, low budget operations, but what they lack in venture funding they more than make up for tremendous passion and insight into their nascent businesses.

This year there were two different sections of students, a nod towards the growing popularity of student business owners. My first lecture was about a month ago, and I basically used the same set of slides that I have had, updated through the years as we made the transition from presidents using Blackberries to presidents using their own social media networks. That was the before times. We knew Elon was up to something, we just didn’t know the deets.

Now we do. And so far the Bird is not faring well. Thousands of layoffs. Whipsawing technical requirements that literally change by the hour. Troll Tweeting by your CEO is not a way to set corporate (or national) policy. In my Spark classes over the years I have been consistent that the students should avoid any mention of sex, politics and religion. The new Twitter CEO has adopted the opposite stand. I don’t think things are going to end well.

Remember Orkut, Friendster, SixDegrees or Myspace? They have all come and gone over the past 25 years. Twitter may soon enter that realm. I feel as though I am witnessing the breakup of my first marriage, or the collapse of the British Monarchy and the less that I say about either of them the better. 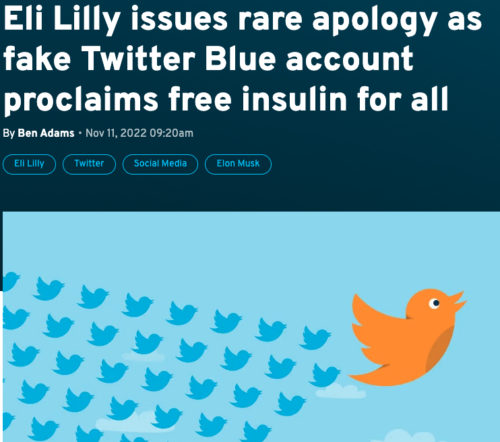 Twitter has evolved from being the world’s town square and the global media assignment story editor to the place for shaming. Those blue checkmarks that seemed so valuable back in 2012 or so have turned into Troll-a-rama. Someone impersonating Eli Lilly’s account brought the stock price down the next day. And as if that wasn’t enough, a reporter for the Washington Post was able to obtain two fake accounts within minutes, impersonating a comedian and a US Senator (with prior permissions from both).

Many of my tech journo colleagues have begun the migration to Mastodon. You can find me here. I am still Tweeting too, but leery of what will happen. It is interesting to set out to learn another social media network. Hindsight is great: I am glad that I didn’t invest much time in Google+.

While I was preparing the new presentation for my Spark class, I also watched the 2021 documentary 15 Minutes of Shame, which was co-produced by Monika Lewinsky. It was well done, and shows us how public shaming has evolved since her Clinton intern days. I think Twitter’s new model is more the town dump than the town square.

My session should be interesting.  You can view my new slides here on Slideshare.

7 thoughts on “Is this the beginning of the end of Twitter?”