While my days of being in engineering school are in the paleolithic era, I do remember a fondness for cheat sheets, especially when it came time to cram for exams. I was recently reminded of this while watching a movie about NASA’s mission control doings during the Apollo era. On the screen flashed the following handwritten cheat sheet, to be used when one of the spacecraft computers was showing a particular alarm code. I believe it was compiled by Jack Garman. 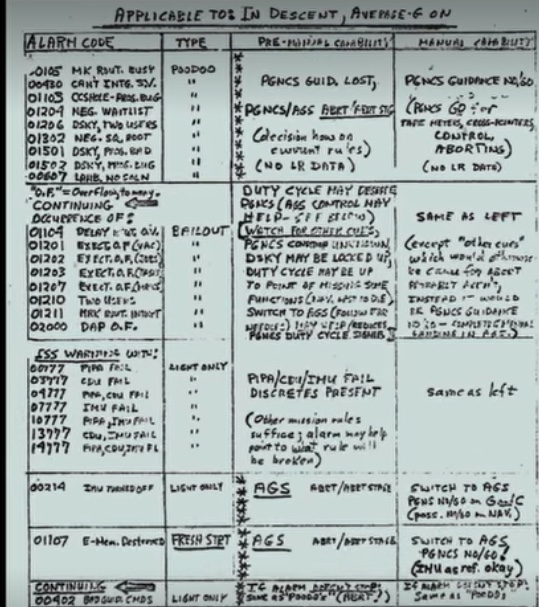 This struck me as fortuitous — as some of you might remember, when the Eagle lunar module from Apollo 11 was making its descent to the surface of the moon, it had set off a 1202 error code. The engineers had experienced this code in previous simulations, and within seconds were able to tell Armstrong and Aldrin to just ignore it and carry on: the code indicated that the computer was being overwhelmed with inputs. Given that computer had the processing power of today’s coffee pots (1 MHz processor with 150 kb of RAM), it wasn’t a show-shopper.

But it also struck me as somewhat amusing too. Here is NASA, spending billions of dollars inventing all this technology, and the success and failure of the first moon landing came down to some engineer putting this one-pager together that saved the day. Garman had memorized these error codes and was able to quickly respond to the flight controllers that the landing could continue.

If you want to read more about the circumstances around the moon landing, check out what I wrote about in 2009. There are some links to interesting web pages that show simulators for the guidance computers and also a real-time video and audio of the entire mission.

If you want to see some good examples of the cheat sheet genre, Peter Nikilow has collected hundreds of them on his Pinterest account. If you have your own favorites, put a link in the comments and say what makes it so.

2 thoughts on “In praise of cheat sheets”