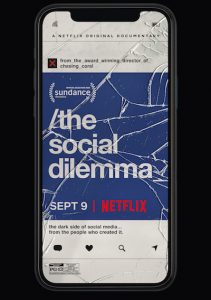 Earlier this month, Netflix started streaming the movie The Social Dilemma. It was first screened at Sundance earlier this year, and now is widely available. Since its release, it has been widely reviewed.

The film combines documentary-style interviews with leading nerds behind Facebook, Twitter, Uber, Instagram, etc. along with star turns from Shoshana Zuboff, Jaron Lanier and Renee Diresta. The thesis is that the social giants have sold us and our data down the river, and we now are stuck with them. The New York Times review is mostly positive, saying the interview subjects are “conscientious defectors from these companies who explain that the perniciousness of social networking platforms is a feature, not a bug.” The best interview subject is Tristan Harris, a former design ethicist at Google who now runs a non-profit called the Center for Humane Technology.

You can read my extensive review of the film on the Avast blog here. The film could be one small step to help understand the role that social media plays in our lives. It could  also help start some conversations with the less tech-savvy family members and friends.

You can also listen to my podcast as Paul Gillin and I discuss our reactions to the movie and what B2B marketers can takeaway from it.