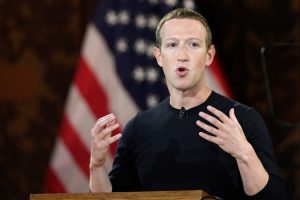 Merriam-Webster defines sanctimonious as “hypocritically pious or devout.” Last week Mark Zuckerberg gave a speech at Georgetown University about Internet political advertising, the role of private tech companies with regard to regulating free speech, and other topics. I found it quite fitting of this definition. There has been a lot of coverage elsewhere, so let me just hit the highlights. I would urge you all to watch his talk all the way through and draw your own conclusions.

Let’s first talk about censoring political ads. Many of you have heard that CNN removed a Trump ad last week: that was pretty unusual and doesn’t happen very often in TVland. Most TV stations are required by the FCC to run any political ad, as long as they carry who paid for the spot. Zuck spoke about how they want to run all political ads and keep them around so we can examine the archive later. But this doesn’t mean that they allow every political ad to run. Facebook has their corporate equivalent of the TV stations’ “standards and practices” departments, and will pull ads that use profanity, or include non-working buttons, or other such UI fails. Well, not quite so tidy, it appears.

One media site took them up on their policy. According to research done by BuzzFeed, Facebook has removed more than 160 political ads posted in the first two weeks in October. More than 100 ads from Biden were removed, and 21 ads from Trump. BuzzFeed found that Facebook applied its ad removal policies unequally. Clearly, they have some room to improve here, and at least be consistent in their “standards.”

One problem is that unlike online ads, TV political ads are passive: you sit and watch them. Another is that online ads can be powerful demotivators and convince folks not to vote, which is what happened in the 2016 elections. One similarity though is the amount of money that advertisers spend. According to Politico, Facebook has already pocketed more than $50 million from 2020 candidates running ads on its platform. While for a company that rakes in billions in overall ads, this is a small number. But it still is important.

One final note about political ads. Facebook posted a story this week that showed new efforts at disinformation campaigns by Iran and Russian-state-sponsored groups. It announced new changes to its policy, to try to prevent foreign-led efforts to manipulate public debate in another country. Whether they will be successful remains to be seen. Part of the problem is how you define state-sponsored groups. For example, which is state-sponsored? Al Jazeera, France 24, RT, NPR and others all take government funding. Facebook will start labeling these outlets’ pages and provide information on whether their content is partially under government controls.

Much was said about the first amendment and freedom of speech. I heard many comments about Zuck’s talk that at least delineated this amendment only applies to the government’s regulation of speech, not by private companies. Another issue was mentioned by The Verge: “Zuckerberg presents Facebook’s platform as a neutral conduit for the dissemination of speech. But it’s not. We know that historically it has tended to favor the angry and the outrageous over the level-headed and inspiring.” Politico said that “On Facebook, the answer to harmful speech shouldn’t be more speech, as Zuckerberg’s formulation suggests; it should be to unplug the microphone and stop broadcasting it.” It had a detailed play-by-play analysis of some of the points he made during his talk that are well worth reading.

“Disinformation makes struggles for justice harder,” said Slate’s April Glaser, who has been following the company’s numerous content and speech moderation missteps. “It often strands leaders of marginalized groups in the trap of constantly having to correct the record about details that have little to do with the issues they actually are trying to address.” Her post linked to several situations where Facebook posts harmed specific people, such as Rohingya Muslims in Myanmar.

After his speech, a group of 40 civil rights organizations called upon Facebook to “protect civil rights as a fundamental obligation as serious as any other goal of the company.” They claim that the company is reckless when it comes to its civil rights record and posted their letter here, which cites a number of other historical abuses, along with their recommended solutions.

Finally, Zuck spoke about how effective they have been at eliminating fake accounts, which number in the billions and pointed to this report earlier this year. Too bad the report is very misleading. For example, “priority is given to detecting users and accounts that seek to cause harm”- but only financial harm is mentioned.” This is from Megan Squire, who is a professor of Computer Science at Elon University. She studies online radicalization and various other technical aspects. “I would like to see numbers on how they deal with fake accounts used to amplify non-financial propaganda, such as hate speech and extremist content in Pages and Groups, both of which are rife with harmful content and non-authentic users. Facebook has gutted the ability for researchers to systematically study the platform via its own API.” Squire would like to see ways that outside researchers “could find and report additional campaigns, similarly to how security researchers find zero days, but Facebook is not interested in this approach.”

Zuck has a long history of apologia tours. Tomorrow he testifies before Congress yet again, this time with respect to housing and lending discrimination. Perhaps he will be a little more genuine this time around.

3 thoughts on “An update on Facebook, disinformation and political censorship”