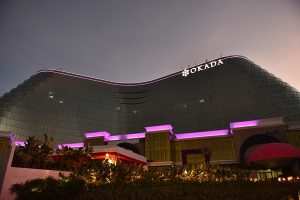 When you hear about an IT staff that has to build their infrastructure from scratch to support a new business, you think, “That couldn’t be that hard – they had no legacy infrastructure to support. What a dream job.” Well, it wasn’t a piece of cake for the crew at the Okada Manila resort hotel, and in an interview with Dries Scott, the SVP of IT for Okada, I got to see why.

Okada was built on a huge site and is similar to the resort-style properties that can be found in Las Vegas and Macau. It will house 2,300 guest rooms when it is fully built and have 10,000 employees. Scott’s IT department has at least 100 of them full-time — plus contractors — to support 2,000 endpoints and numerous physical and virtual servers placed in two separate datacenters on the property.

Scott actually worked for a few of the Macau resort hotels before coming to Manila, and he wanted to create the ideal IT environment for a five-star luxury hotel. “The biggest decision we had to make was to try to steer clear of having actual desktop PCs as our workstations,” he said to me when he sat down for an interview yesterday. “When you are starting from a clean sheet of paper, you want something that could last 10 to 20 years and want products that could evolve over this time period.” He decided to choose VDI for his endpoints. “I wanted to move away from the usual desktop PC environment, although we ending up having a few of them for our staff. PCs are a pain to manage, because hard drives crash, getting updates and patches distributed isn’t easy, and other issues.” To support their VDI deployment they purchased a variety of products, including XenDesktop, XenApp and NetScaler, HP thin clients and Dell servers.

One of the key enabling technologies is FSLogix Office 365 Container.  “This makes Outlook running on XenApp and XenDesktop able to mount users’ profiles as if they were on a local C: drive, so Windows acts normally and Outlook works like it is running on a regular PC desktop,” he said. This means you get the performance of the virtual workspace but the ease of management too.

Having a VDI solution meant some initial support hurdles. “We had to have a lot of patience with our users, some of whom were using VDI workstations for the first time,” he told me. “I could have taken the easy way out and just bought desktops for everyone, but I knew eventually VDI will pay off and benefit us in the long run.”

One concern Scott had was keeping corporate data secure. Given the market of his resort, he wanted to ensure that customers’ information stayed on the corporate systems; “It is one of our most critical assets,” he said. “Users don’t have the ability to remove any corporate data from the company.” His thin clients locked out USB access, for example, and he also set up appropriate data leak policies too. Through ShareFile, he has other policies for how files can be shared across his staff, and he prevents access to public SaaS repositories, like consumer file-sharing services whenever possible. Finally, he figured out ways to keep data from his construction contractors on his servers. “I didn’t want them to pack up their PCs and leave with my data on them,” he said.

Building a new resort’s IT infrastructure wasn’t as easy as I was assuming, mainly because some IT elements needed to be put in place during the construction phase to support those workers on the job site. This meant erecting temporary buildings and networks and then migrating these resources to the production environment once the hotel was built. “That migration wasn’t easy, but we are just about through that process,” he said. “We have certainly been through a bit of a bumpy road.” One of his recommendations was to use Citrix consulting services in setting up his environment and helping define the appropriate computing architecture. “They can help make everything stable from the beginning and figure out your app and server configurations.”

What helped him pull off this project? Executive buy-in. “Our chairman is an engineer and very much into technology. It was a massive help that he supported our decisions from day one. All he wanted was to implement my vision and he gave me the ability to implement it.”