With the announcement last week of the Enterprise Ethereum Alliance, it is timely to look at what is going on with blockchain technologies. The Alliance was formed to try to encourage a hybrid kind of blockchains with both public and private aspects. Its members include both cutting-edge startups along with established computer vendors such as Microsoft and major banks such as ING and Credit Suisse. As mentioned in this post by Tom Ding, a developer at String Labs, the Alliance could bring these disparate organizations together and find best-of-breed blockchain solutions that could benefit a variety of corporate development efforts.

When Bitcoin was invented, it was based on a very public blockchain database, one in which every transaction was open to anyone’s inspection. A public chain also allows anyone to create a new block, as long as they follow the protocol specs. But as blockchains matured, enterprises want something a bit more private, to have better control over the transactions for their own purposes and to control who is trusted to make new blocks.

This isn’t a mutually exclusive decision, and what is happening now is that many blockchain solutions use aspects from both public and private perspectives, as you can see from this infographic from Let’s Talk Payments.

You want the benefits of having multiple programmers hammering against an open source code base, with incentives for the blockchain community to improve the code and the overall network effects as more people enter this ecosystem. You also gain efficiencies as the number of developers scales up, and perhaps have future benefits where there is interoperability among the various different blockchain implementations. At least, that is theory espoused in a recent post on Medium here, where R Tyler Smith writes: “One thing that blockchains do extremely well is allow entities who do not trust one another to collaborate in a meaningful way.”

The Ethereum Alliance is just the latest milepost that blockchains are becoming more potentially useful for enterprise developers. Over the past year, several blockchain-as-a-service (BaaS) offerings have been introduced that make it easy to create your own blockchain with just a few clicks. Back in November 2015, Microsoft and ConsenSys built the first BaaS on top of Azure and now have several blockchain services available there. IBM followed in February 2016 with their own BaaS offering on BlueMix. IBM has a free starter plan that you can experiment with before you start spending serious money on their cloud implementations. Microsoft’s implementation is through its Azure Marketplace. There is no additional charge for blockchain services other than the cloud-based compute, network and storage resources used.

IBM’s BlueMix isn’t the only place the vendor has been active in this area: the company has been instrumental in supporting open source code regarding blockchain with large commitments to the Apache Hyperledger project. Not to be left out of things, the Amazon Web Services marketplace offers two blockchain-related service offerings. Finally, Deloitte has its own BaaS service offering as part of its Toronto-based blockchain consulting practice. 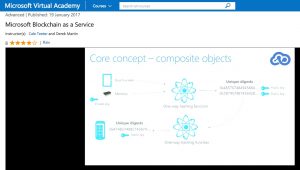 If you want to get started with BaaS, here is just one of numerous training videos that are available on the Microsoft virtual academy that covers the basics. There is also this informative white paper that goes into more details about how to deploy the Microsoft version of BaaS. IBM also has an informative video on some of the security issues you should consider here. (reg. req.)