Back in November 2011, Yahoo’s then CEO, Carl Bartz was fired. I wrote about this event for ReadWrite.com (then called ReadWriteWeb). I thought it was worth recalling today, on the news that much of Yahoo’s core products has been sold to Verizon.

Firing Carol Bartz made us go into the Wayback Machine to recall the many good things that Yahoo has created over its life. While there are many that are lining up to take shots at the Yahoos certainly justified, there are still some things worth noting.  (Below is an early home page, others can be found at ITworld here.) 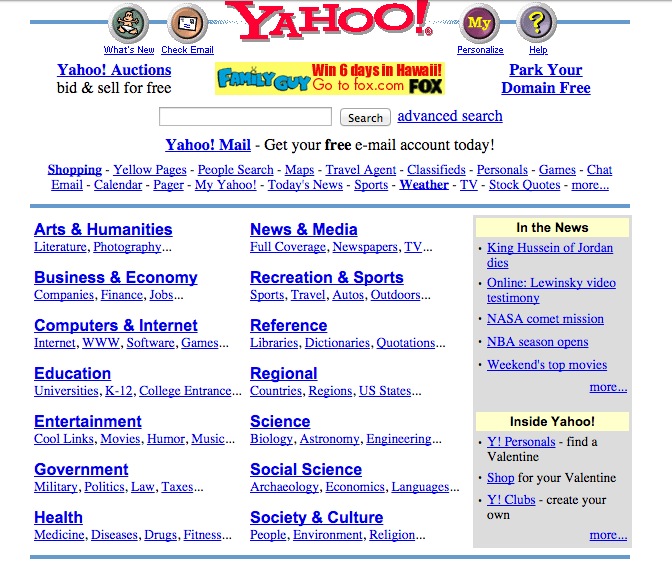 Some of Yahoo’s developer services were way ahead of their time, and many of them are no longer with us (updated with 2016 information):

Yes, Yahoo was always a day late and a dollar short when it came to its webmailer, its IM client, and eventually its search service. But still, it has traffic. One Internet commenter said, “they should use their front page as a fire hose, projecting mainstream users onto these platforms” such as the ones mentioned above. Fair enough. And once upon a time, I thought their Yahoo Groups email list service was terrific: the last few years haven’t been kind to this service. And while my Yahoo email inbox seems perennially spam-filled, their financial and movie pages are top-drawer.

Many comments around the ‘Net seem to label Yahoo as an engineering company that can’t get its products marketed or gain any adoption. One said “Yahoo lost its motivation, its excitement.” Now it is has lost its CEO. Sadly, that last prediction wasn’t to be.