With the passing of John Akers last week, I was reminded how very different the IBM of today is from the company that I began covering when I first entered tech journalism back in the mid-1980s. Back then, IBM was a hardware powerhouse: key innovations in chip design, the first hard disk drives, PC networking, and more all came out of IBM’s research labs. Back in the 1980s, IBMers were frequent Nobel prize winners. They also wore white shirts and dark suits with rep ties to work. How many of you even know what a rep tie is, let alone seen one lately on anyone in your IT departments?

Almost none of that effort remains in the IBM of today. Hardly anyone gives token ring networks a second thought: Ethernet and its descendents won that battle long ago. Indeed, IBM got out of the PC business years ago when it sold off its assets to Lenovo. The chip designs that IBM invented are now popular in almost every other vendors, including Intel. IBM mainframes now run Linux, in addition to the languages and programs that I was familiar back in the 1980s.

Today’s IBM is all about software. Its Websphere and SoftLayer groups are growth areas for the company: both came out of acquisitions mixed with lots of internal development. 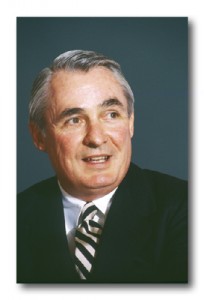 Akers presided over IBM at the peak of its population — some 400,000 people worked for him at one time but that was a major issue and unsustainable. By the time he was forced into retirement in 1993, about a quarter of this workforce was gone and thus began the great transition into a software company.

Despite these layoffs and running IBM during some turbulent times, Akers was the head of IBM when it was leading the PC revolution in corporate America. While he wasn’t in charge when the IBM PC was introduced back in 1981, he did oversee the expansion of the PC’s first decade. At Transamerica Life Insurance where I worked in the end user support department, it was heady times as we bought thousands of PCs for our knowledge workers. While IBM didn’t have the most innovative PCs, they had a solid brand awareness that made corporations initially comfortable with purchasing them.

IBM had some spectacular failures in the PC business back then too: the PCjr, the PS/2 with its proprietary hardware bus, the aforementioned token ring networks, and a misguided attempt to unify PCs with the first digital phone systems. But its presence in the PC business ultimately led to the success of Microsoft, Intel, Apple, Sun, Oracle and thousands of other companies that make up the industry today. The IBM PC was revolutionary at the time, not for what it had inside, but for what it didn’t have: any proprietary IBM technology. It was the first piece of hardware from IBM that could be built by anyone out of common parts, and many of its competitors did exactly that. Had IBM come out with its PS/2 or some other proprietary system in 1981, the PC industry would have had to come about differently. Now look at how cheap you can buy a Raspberry Pi device.

Akers missteps had another important legacy: he began IBM’s transition to a software company. Since those early days, IBM has had dozens of acquisitions including Cognos, Lotus, Tivoli, Rational, FileNet, Internet Security Systems, SPSS, CastIron, and BigFix — many of these were billion-dollar companies that are probably not familiar to you now. Software is now about a third of IBM’s overall revenues, and its hardware business continues to decline.

But while Akers ultimately couldn’t change IBM by himself, he did a great job mentoring many people who did, including his eventual successor Sam Palmisano and Steve Mills, who runs its software group. And now IBM’s head is Ginni Rometty, its first female CEO. I don’t think she wears a rep tie either.

7 thoughts on “IBM and Akers, then and now”