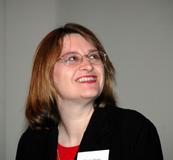 This week I got a chance to meet someone that I admire greatly whom I have never met who lives nearby. Her name is Elonka Dunin, and her day job is a computer game developer. But her hobby is cracking codes, and in particular the sculpture that has been in the middle of the CIA headquarters campus in Virginia called Kryptos since 1990.

When I lived in Washington DC I used to take the bus that would stop at the CIA to an office elsewhere in Virginia. You couldn’t get off unless you worked there, which for some reason I found fascinating. It isn’t the sort of place that gives public tours, as you might imagine.

Turns out I wasn’t the only one who wanted to see the place. It took Dunin several years to finally get an invite to come to the campus and see the sculpture first-hand. By then some of the codes that are part of the sculpture had been solved. There are four codes that have been etched into the side of the sculpture: three of them were solved by Jim Gillogly, a California computer scientist, in 1998. After he came forward, both the CIA and the NSA claimed they had earlier solutions but just didn’t tell anybody. Right. No one has solved the fourth piece of the puzzle, spy or amateur.

Dunin was speaking at the StrangeLoop conference in St. Louis this week and showed her efforts around trying to decrypt that last code, along with some of her other work in cryptography. She is a very energetic woman who has consulted with many of our leading government security infrastructure over the years. She also maintains one of the better websites on Kryptos and has catalogued all the variations of the sculpture produced by the artist Jim Sanborn.

I have known about Kryptos for a while and have corresponded with Dunin – she gets a lot of email as you might imagine, so it was great to meet her in person. There are hundreds of people who have spent numerous hours trying to decode the last message. She gave lots of details about the set of sculptures that are part of the CIA installation; including several that have Morse-coded messages on them.

Sanborn was taught cryptography by a former spy, and went on to produce other crypto-related artwork, including one that combines Cyrillic and English on a North Carolina university campus that you can see here. Dunin led the team that decoded that piece a few years ago. There is a copy of Kryptos also at the Hirshorn Museum in DC and Sanborn designed several pieces that hang in the restaurant next to the Spy Museum in DC. I have a conference to attend in DC next month and you can guess that both places will be on my agenda. (And for those of you that haven’t been to the Spy Museum, it should be on yours. It is a fascinating place that takes hours to experience if you are into that sort of thing.)

The Kryptos story is also a fascinating one. Even if you aren’t into breaking codes there are still lots of lore that can draw you in. One of the decoded messages relates to the diary of archaeologist Howard Carter on the day he discovered King Tut’s tomb in 1922. And the author Dan Brown used parts of the Kryptos story in his book The Last Symbol (although some of what he wrote was made up). Indeed, the anagram of the name of one of the characters in Brown’s book is taken from Dunin herself, which is pretty cool. (My name has been a major character in a work of fiction but I think it was pure coincidence.)

Dunin has written several cryptography-related books that you can find on her website, including working with Thomas Beyer, a literature professor at Middlebury College, on 33 Keys, a book that explains the various codes and puzzles in The Lost Symbol.

And if you are ready to announce your solution to Kryptos, she has some instructions for how to do it. A class act, she.

3 thoughts on “Cracking the CIA’s Kryptos”