The city of Philadelphia recently hired Mark Headd as their Chief Data Officer, and we are beginning to see this title crop up more frequently since it first came into being several years ago. Why should your organization have one and what do they do that differs from the CIO, CFO or CTO?

Headd is an interesting choice. He comes from Code for America and ran several open data projects in his career, being a big supporter of numerous civic hackathons and using technology to open up government data to the public. <a href=”http://www.newsworks.org/index.php/local//innovation/42657-meet-mark-headd-philadelphias-first-chief-data-officer”>He is “making sure agencies aren’t reinventing the wheel, running into the same problems,” Headd said to the NewsWorks blog here</a>. “You get someone who can take a holistic view across city government and be strategic about the city’s use of data,” he added.

And the title is taking hold. <a href=”http://www.information-management.com/news/data-steward-chief-data-officer-goldensource-10022664-1.html”>”Over 60 percent of firms surveyed are actively working towards creating specialized data stewards, and eventually Chief Data Officers, for their enterprise,” according to a recent survey by GoldenSource Corporation cited in Information Management Magazine here.</a>

In a presentation by Deepak Bhaskar, the Senior Data Governance Manager at Digital River, he shows that this isn’t so simple, and that managing data across the entire enterprise can take on many dimensions. 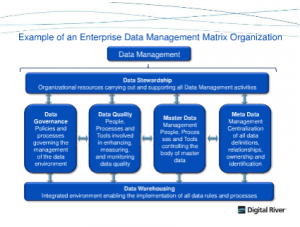 Some organizations have begun to even identify their CDOs on their websites, as the <a href=”http://www.fcc.gov/data/chief-data-officers“>Federal Communications Commission does here. </a> They claim to be the first federal agency with the title, and have CDOs in each bureau or specialized office such as wireless or wireline communications. It is a notable effort.

Consulting firm Cap Gemini, among others, says that ideally one person should be focused on the quality, management, governance and the availability of data. It is about treating data as a strategic asset. <a href=”http://www.analytics-magazine.org/septemberoctober-2011/401-chief-data-officer-new-seat-in-the-c-suite”>But most organizations don’t give data the same kind of attention as other corporate assets</a> such as people or expenses, write Rich Cohen and Ara Gopal for Analytics Magazine last year.

That is ironic, because as IT departments move towards bring-your-own-devices and cloud-based computing, they should be more focused on their data. As one corporate IT manager from a large manufacturing firm told me, “Nowadays we don’t own the devices, we don’t own the servers, we don’t own the networks that connect them, and we don’t own any of our apps that run on these devices. All that we have left to derive value from is our data.” How true.

Why consider a CDO now? Several reasons. “Enterprise data is no longer black and white,” says Cohen and Gopal, meaning that data can be found anywhere and everywhere. Indeed, in some cases, IT departments can’t even figure out where their data actually lives. Chris Wolf, an analyst at Gartner, spoke about one firm that he interviewed that made a recent upgrade of its Microsoft Office suite from 2003 to 2010 version. In that upgrade, they lost support for an aging Access 2003 database that they weren’t aware of, yet was used by dozens of employees for their mission-critical data by one department. Oops.

Just think about all your customer interactions today. You can have a collection of text messages, blog entries, social network posts, mobile applications, your own and customer-generated videos, Tweets, emails, and even Instant Messages. How can you track all of this data? Ultimately, one person needs to be in charge and see the entire data landscape.

Another reason is that “recent regulatory reforms have placed an even higher emphasis on data accuracy and the risks associated with the lack of end-to-end visibility,” say Cohen and Gopal.

What is the role of the CDO?

<a href=”http://smartdatacollective.com/brett-stupakevich/52217/top-3-reasons-you-need-chief-data-officer”>Brett Stupakevich, writing in a blog on Smart Data Collective</a>, thinks that CDOs should have three primary responsibilities: data stewardship, or being the chief owner of all enterprise data; data aggregation, or being responsible for “building bridges between business units and creating an enterprise focus for the data”; and communicate data schemas and eliminate any semantic differences among enterprise data. That is a nice way of thinking about it.

Cohen and Gopal add that the CDO should “develop capabilities to measure and predict risk and influence enterprise risk appetite at the executive table.” The CDO should also be watching the top line revenue numbers and bottom line as well.

“The one skill that helps me a lot in my current job is to interact well with people, so I lead my team efforts to better serve the business needs of my C-Level peers,” says Brazilan CDO Mario Faria on a LinkedIn forum. “Technical and business skills are necessary however not sufficient for this job.”

Whom should the CDO report to?

Cohen and Gopal ask a very good question: “Does the CIO report to the CEO or to the CFO; in other words, is the IT organization seen as an integral part of the corporate strategy or it is seen as a cost center that enables day-to-day business operations?” But there could be a larger issue, namely, does the entire C-suite buy into the CDO as another peer? Cohen and Gopal also say, “it can be difficult to secure executive backing unless the CDO initiative is seen as a direct response to a burning business problem.”

Depending on your own organization, a CIO with enough revenue authority – or a CFO with enough IT authority — might be called a CDO. But it isn’t so much the title but what the person is actually responsible for and how much visibility into a corporation’s data footprint they actually have.

It seems that CDO has yet to find its way to corporations involved in Big Data. Chief Scientist for Bit.ly Hilary Mason told me “I don’t know that many people with the specific title of Chief Data Officer. It seems like that would be a title found at larger corporations, but I like that it implies that whoever controls the data actually reports directly to the CEO.”