Last week Shopify’s COO Kaz Nejatian sent a memo to its employees saying it would cancel previously scheduled meetings of more than two people, according to CNN. “No one joined Shopify to sit in meetings,” he wrote. True, that. Larger meetings of 50 or more would only be allowed on Thursdays. This couldn’t have come at a better time: as companies have shifted to more remote workers, they also have to do a better job at meetings, and often that means less is more.

We have grown to become meeting-dependent. Part of the reason is the ubiquity of group communications tools such as Microsoft Teams and Salesforce Slack. Of course, we have always had these tools in the past (remember Notes and Groupwise?) but the tools have gotten better. Ironically, this means meetings can proliferate and the potential for abuse increases. We’ll see where Shopify ends up in a few months and whether they are successful at taming the meeting monster. I recall back in the 1990s, Computer Associates used to turn off their corporate email system for several hours during the workday so employees could focus on their real work. That strategy didn’t age well, to be sure.

A survey of Microsoft Teams usage data found that since February 2020, users saw a 252% increase in their weekly meeting time and the number of weekly meetings has increased 153%. You can see the trends over the past couple of years in this chart below. 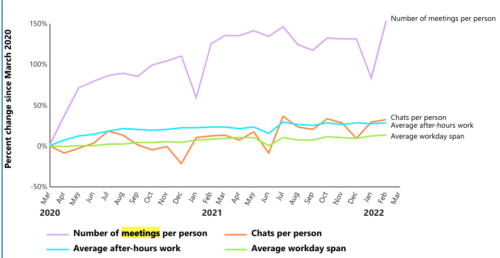 Microsoft found that people are becoming more intentional about taking breaks, avoiding double booking, and establishing meeting-free work blocks, along with having shorter and more ad hoc meetings according to their Outlook calendar data studied as part of this report. All of these things are great, and perhaps a Shopify shock to the overall culture has some chance of success.

As I said, it is about time. I have written about this subject for more than a decade, including this blog post from 2012 about how to be more effective at scheduling them and the various meeting calendaring software products that should be used. (Not email!) Adam Enfroy has this comparative review of these tools.

But for the software to be effective, you have to change the culture. Entrepreneur.com has these important takeaways here, including promoting small talk for cementing personal connections, having someone be in charge of the agenda and then keeping things on track, and setting expectations up front. Some other recommendations come from an HR consulting firm and include:

1 thought on “The end of meetings could be upon us”