This morning I was watching the live coverage of the meeting of six foreign ministers in the Israel Negev. It was a remarkable experience because of the venue, the nature of the broadcast itself and the way it was being reported, and the global context of the meeting.

Before I can explain the situation, let’s take a short quiz. Here are six countries (not the same list as the ministers). Put them in order from most to least democratic. Use any metric you’d like. USA, Rwanda, Laos, Moldova, Norway and Qatar. Don’t peek at the end of the essay for the results quite yet. I will give you one hint: we are not the top country, by a long shot. 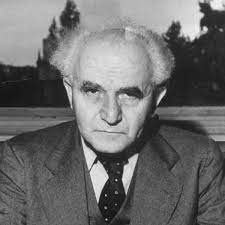 So why am I writing about this today? The Negev Summit, as it was billed, covered the ministers from USA, Morocco, UAE, Bahrain, Egypt and Israel. Some of the men were in Israel for the first time in their lives, which was interesting in and of itself. It was notable who was not there:  the leaders of Jordan and Palestine were meeting in the West Bank as a bit of counter-programming. What was different (apart from the actual meeting itself) was the location: the last home of David Ben-Gurion, who was the founder of the modern Israeli state.

That is how I have thought of him ever since I was a pre-teen attending Hebrew school. He is well-regarded by many Israelis and there are several things that carry his name today, including the Tel Aviv airport where every tourist to Israel and the West Bank arrives and a university in Beersheva that I have been to numerous times and where my son-in-law got both of his college degrees. If you drive another 45 minutes south of the university, you will get to the Negev town of Sde Boker, which is where the summit took place. There is a kibbutz and it is also near a Bedouin camp, and also not too far from Israel’s only nuclear “research” reactor.

Anybody who thought at the end of 2020 that things could not get worse for the world’s democracies has been proven wrong, says the Economist’s Intelligence Unit in their latest “Democracy Index” report. The overall index hit a new low since it first began its tabulations in 2006, largely thanks to a variety of government-imposed tracking and monitoring tools of their citizens caused by the pandemic. The report goes into lots of detail about how they scored each of 167 countries on 60 different metrics such as electoral processes, civil liberties, and government functions. These are rolled up to classify each county into one of four categories:

My six-country quiz contains countries in each category. And here is another hint: we are not a “full” democracy by the Economist’s definition. Sad to say. They figure out the segments based on examining the various components of freedom, such as: freedom from want and the satisfaction of material needs; political and religious freedom; democratic rights and equal treatment for all citizens; equality of opportunity and the avoidance of stark economic and social inequalities. One of the things that interests me is that there are various shades of authoritarianism. The World Population Review counts 52 countries and describes them as one of five different types, based on how a dictator grabs and maintains their power. This could be through the use of the military, a monarchy, a force of personality, a single political party, or some combination. The various dictators are listed and linked to by name.

Another group that tracks these issues is Freedom House’s annual “Freedom in the World” report. It scores countries by overall freedom, internet freedom, and democracy scores. They use a definition for electoral democracy which includes:

Going back to the Negev Summit, I should mention that I was watching it on Al Jazeera’s English channel, which as I said was doing a live broadcast wrapping up the summit. This is the channel which is owned by the Qatar government, which is considered an authoritarian regime because of its leader. But Qatar is on the upswing: the report shows a steady increase in their index since it began. I have been watching more of their coverage because they do a really good job of reporting from all sorts of places around the world (they had two reporters at the summit, for example).  At one point, the analyst from the channel being interviewed mentioned how Ben-Gurion was also the leader of many attacks on the Arab residents in the early years of Israel’s independence, a point of view that I hadn’t previously considered.

Ok, now time for the list, from most to least (with their rankings from the Economist report, where the lower number means more democratic):

3 thoughts on “Ranking the world’s democracies”