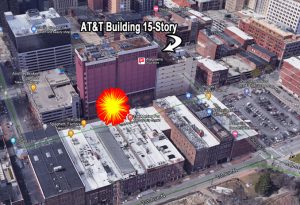 I have written before about my love affair with telephone central offices. This past week, we all now know where Nashville’s CO is located, and we mourn for the people of that city. Nashville is a city that I have been to numerous times, for fun and for business. Little did I realize as I walked among the honky tonk bars and restaurants on Second Street that I was passing by its main CO, which offers a wide range of communication services.

Like the CO that was buried by the collapse of the World Trade Center back in 2001, there was a lot of water damage from the firefighters, and the Nashville repairs were hampered by having to work around the crime scene investigators. But still, within a few days AT&T was able to get various services back up and running, including 911 and airport communications, along with wired and cellular services. The company deployed a series of portable cell towers around the region. The lines that went through this CO connected not just Nashville but areas that were in adjoining states.

This is the conundrum of the CO: in the early days of telephony, they had to be located in densely populated areas, because stringing copper lines from each termination point cost money. To shorten the lines, they had to put them near the people and businesses that they were connecting. This means that you can’t easily protect them with physical barricades a la Fort Knox (or other government buildings). Plus, there are more than 20,000 COs in the US by some estimates. That is a lot of real estate to protect or potentially relocate.

COs are also relatively easy to find, even though many of them are located in nondescript building in major urban areas. My own CO sits like Nashville’s across from a similar collection of restaurants and commercial businesses. There are websites lovingly constructed by other fans of telecom, such as this one or this one that show photos of the actual buildings (although you will have to work a bit to find their street addresses). In my blog post from 2018, I posted pictures of several COs that I have been to, including one on Long Island where I brought my high school networking class on a field trip back in 2001.

Whether or not the bomber was intentionally targeting AT&T’s CO or not, one thing is pretty clear to me: these COs are the weak points in any terror campaign. I don’t have any real solutions to offer up here, just an aching spot in my heart for the men and women that have built them and keep them running.

N.B. This is the last day of a horrible year, a year punctuated with my own personal health story that had nothing to do with Covid. I want to send out a note of thanks to all of you that took the time to send me your support, and hope that you found your own support team to help you along as well. Here is my wish that 2021 will be better for all of us, and that we can support and care for each other to make it so.

2 thoughts on “Where is your phone central office?”