I have a thing about the telephone central office (CO). I love spotting them in the wild, giving me some sense of the vast connectedness that they represent, the legal wrangling that took place over their real estate, and their history in our telecommunications connectedness. That is a lot to pack into a series of structures, which is why I am attracted to them.

Many of you may not be familiar with the lowly CO, so I should probably back up and set the scene. Back in the day when all of us had landline phones, indeed, before we even called them such things, the phone company had to wire these phone lines to one central place in each community. A pair of low-voltage wires ran from your home to this central office, and were connected to a vast wire switching center called the main distribution frame. The central office actually supplied the dial tone that you heard when you picked up your phone, which assured you that your phone line was operating properly. 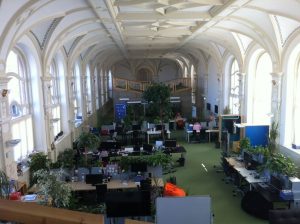 Interestingly, one of the inventors of the central office was a Hungarian named Tivadar Puskas, and I actually got to visit the fruits of his labors when I was in Budapest several years ago. The building that housed his switchboard is now offices occupied by the firm Prezi. Notice it still is quite a beautiful structure, with gothic touches and high ceilings.

I was reminded of visiting the Prezi offices when I was on a trip last week to Columbus Indiana. I have been wanting to go there for several years since first learning that the small city contains some of the best examples of modern architecture in one place. What does this have to do with phone COs? Well, they have a beautiful CO building that was designed in 1978 and it once looked like this. 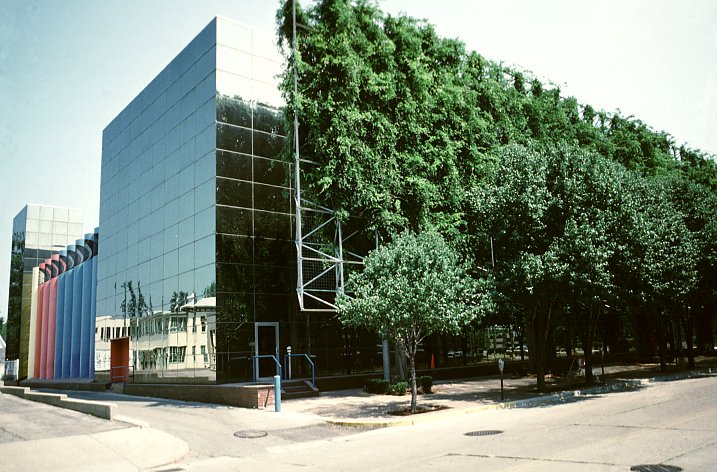 Columbus’ CO was actually an expansion of an earlier and more modest building that was built in the 1930s. The phone company needed more room as the town grew and they were adding services, and so we have this space-frame curtain-glass wall structure that was built around the original building. I would urge those of you interested in seeing other great modern structures to schedule your own trip to the town and see what they have done because there is a lot to see.

But let’s get back to the phone CO. These buildings were at the center of activity back in the 1990s when DSL technology (which is the broadband technology that the phone companies still use to deliver Internet services) was first coming into popularity. At the time there were a number of independent startups such as Covad and Rhythms that wanted to provide DSL to private customers. The phone companies tried to block them, claiming that there wasn’t enough room in the COs to add their equipment. Back in the day, there weren’t many higher-speed data service offerings, so DSL was a very big improvement. This battle eventually was won and while these startups have come and gone, we have Uverse service offered by AT&T as a result. (I wrote about these DSL issues in an interesting historical document from that era.)

In 2001, I was teaching TCP/IP networking to a class of high school boys and wanted to take them on a series of field trips to noteworthy places and businesses near the school. Now, field trips are normal for younger kids, but when you get to high school, that mean 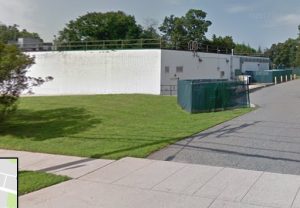 s taking your kids out of other regularly scheduled classes. I thought this would be interesting to my students and so one of the first trips we took was a short one, down the street to the local CO. This was in a very non-descript structure that many of us passed by frequently and didn’t give it any thought (see the photo here).

To give you additional context, this was about two months after the 9/11 attacks. Somehow I was able to convince the Verizon folks (what the local phone company was called at the time) to allow me to bring a bunch of high school kids into their CO. I recall we had old Bell veterans who gave us a tour, and when the time came to show the kids where their home phone lines were located, I volunteered to have them find my own wire pair. I remember the employee pulled the location of my phone wires and told the class that I had something very unusual: back then I had an office phone that also was wired to my home, and he could show the students how this worked so the phones rang in both locations.

I realize that nowadays the landline is a historical communications curiosity more than anything, and you have to look long and hard to even find someone who uses one anymore. So it is great that there are few phone COs that are grandly designed and stand out as great examples of architecture and design, such as the ones I have seen in Budapest and Columbus. Do send me your own favorites too, and best wishes for a great 2018.

6 thoughts on “My love affair with the phone central office”