Today in our Congress, the four executives of Big Tech (Cook, Zuck, Bezos and Pinchai) will testify about their business practices. (You can watch this live or on demand here.) I have written previously about Apple’s issues with running its App Store here. ProtonMail’s Andy Yen has nicely summarized things from his perspective — as a vendor that is trying to make a living selling encrypted mail services. If you want a longer exposition, today’s NY Times has this handy reference piece that reviews the major issues.

Sorry to hit you with so many links but I wanted to get all that down. Who knows if Congress will act to fix things with Big Tech, but in the meantime we have gotten a preview with a potent counter-example. This week the Turkish government has issued new laws that are aimed at regulating all social media platforms with more than 1M daily users — meaning Facebook (including its WhatsApp and Instagram networks), Pinterest, Twitter, Telegram and YouTube. Basically, everyone.

The regulations call for each vendor to operate a local office in Turkey and store all Turkish data in a local data center. You can imagine the potential for abuse right there. The staff of each office will also be responsible for blocking content requests from the government, and need to respond within two days or risk huge fines. The new law is supposed to go into effect October 1. For several years, Turkey has been blocking all Wikipedia content — and only lifting this restriction in January. And they have been after Netflix as well, resulting in four productions closing up. Ironically in the US, Netflix has received a boatload of Emmy nominations this week. The Times cites one statistic that the government last year blocked more than 400,000 websites.

I wanted to see for myself what actually has been going on with Turkey, and I went to the various “transparency reports” produced by the Big Tech vendors. No doubt in today’s testimony these reports will be cited several times. The reason why I put them in quotes is because figuring out any meaningful information from these reports isn’t easy, as you might suspect. Each of the Big Four vendors has a different format (innovation is alive and well) that makes it difficult to compare them to each other. But to save you the effort, her

e are a couple of spreadsheet fragments so you can see for yourself. The quick summary: Turkey is certainly at the top (Twitter) or nearly so of the most requests to block content. For Twitter, as you see in this spreadsheet, the two columns account for removal requests by the courts (which could be politically motivated) and government-based requests, which you can see add up to more than 6,000, roughly a third of the total removal requests sent to Twitter over last year. 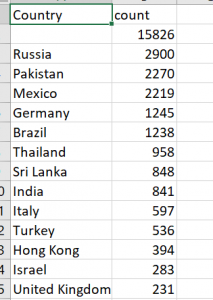 Facebook has a similar spreadsheet, and Russia tops their list, but Turkey is in the top 15. Here are  Google’s page of statistics for Turkey. Overall, since 2009, the Turkish government has submitted more than 12,000 requests to remove items. But it is hard to compare them with other countries unless you bring up the separate pages, and when you do that you see different ways to display the data by country that make any comparison impossible. Apple’s page on Turkey can be found here. Again, the design of this report makes it hard to compare countries, but it looks like Germany is the top place to remove content, no matter which metric you use.

Turkey is far from an open democracy, as I am sure you realize. My point here is that while this recent legislation is poorly designed (and will no doubt be challenged and could be modified before it actually takes effect), it should serve as a warning for our government to try to do the right thing, however you want to define that. I wish our Congress a lot of luck, especially trying to do this in an election year. In the meantime, have fun trying to interpret all these numbers and making sense of them.