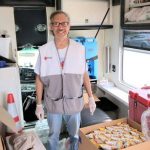 What makes any of us become an American Red Cross volunteer? Does it happen because of a change in our life circumstances, or because of a particular crisis or other event?

Stan Brasch recalls the moment it began for him: it was about three years ago when he retired from federal government service. He had returned to St. Louis after many years in Kansas City where he served with the Kansas National Guard and later the U.S. Army Reserves for a total of over 30 years.

“I wanted to help with the disaster recovery efforts,” he said. Brasch had already had extensive training for the U.S. Department of Transportation in delivering their own rapid response to emergencies.

You can read more about Stan on the Red Cross blog here.