As we become more reliant on technology to support our sheltering-in-place, we realize that many older folks are not quite digital natives and don’t feel comfortable with the now-common computing tasks that many of us have jumped on to handle our lives. And that means that more and more of us have become forced into the de-facto family tech support role. As someone in my generation (60-something) who has been a tech family support nerd for more than half of my life, I wonder how many of you are experiencing this situation? 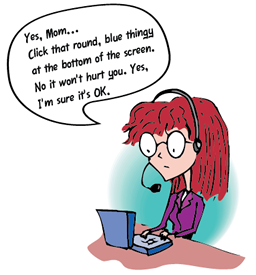 Supporting our non-tech savvy relatives has gotten harder because now so many of us depend on tech to get through the day. The stakes are higher, and the lack of digital literacy can have much higher consequences these days. So to help you out, let’s start by taking stock of the dimensions of digital literacy that you might encounter.

Herewith is a simple questionnaire to give you some idea of how this will all play out in the time of the lockdown.

As you can see, there is a lot of technology to master and manage. Being the family IT support person has gotten a lot more complicated. And as we depend on tech to get us through these times, it can be frustrating for all of us to solve the issues. Just take a step back, see how much tech we have acquired over the years, and take a deep breath.