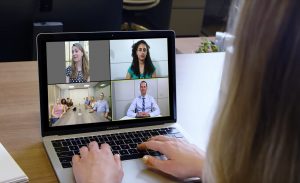 Now that we are sticking close to home, we are using web conferencing tools. No matter how tech-savvy you might be, running a great conference isn’t easy and will require a collection of people with various skills: part TV producer, part sound engineer, part professional speaker, and all sprinkled with a good deal of patience and troubleshooting. For the past several months, I have been on the production team of a rather large conference for the American Red Cross. We have a team of more than a dozen people that puts on this event every month, and lately has had several hundred attendees and multiple presenters. Every month we find and fix new and interesting problems, some technical, some social, some particular to Webex.

Before I give you some lessons learned from this and other web conferencing experiences, I want to relate an anecdote from this month’s call. I was talking to one Red Cross volunteer who was having trouble getting connected. When he told me that he was at a Red Cross blood drive and actually giving blood, I suggested that maybe he should just wait and watch the recording of the event. A few minutes later, he emailed me and told me that he had figured out how to tune in for the meeting. That is devotion!

Here are some suggestions so hopefully you can make your meetings more valuable and professional. You might also want to review another blog post that talks about more general collaborative techniques.

As you can see, there is a lot of work to produce a quality web conference. Feel free to share your own tips here as well.

3 thoughts on “How to run a successful professional web conference”