With all the talk about “flattening the curve” and model disease predictions, I thought I would take the opportunity to explain exactly what these models look like. No, they don’t bear any resemblance to those people that walk down runways or the plastic things we put together with that smelly glue when we were kids.

My first brush with the art and science of math modeling was in graduate school at Stanford. I actually took an entire class in how to build them, and it was one of my favorite classes. Each week we would have a new assignment. What I remember about this class is that the assignment could take anywhere from a few hours to several days to complete. Sometimes — most times — the assumptions that I made were so wrong that I would have to start over. I remember a few of the assignments: one was to build a model to help women decide when they should get screened for breast cancer. Another was to help the Palo Alto school system decide which of their grade schools to close for under enrollment. These two were very tough, and I can’t remember if I came anywhere near the correct approach, just that they kept me up for many late nights.

What made this class interesting was that it was taught by two business professionals who lived in the “real world” and deliberately chose examples from some of their consulting projects. That particular class is no longer being taught. Indeed, searching through Stanford’s website, I was chagrined to find out that my degree, Operations Research, was eliminated more than 25 years ago. Time marches on.

Actually, I had an earlier experience with math models. I had a student job rebuilding these antique brass and string models that were created in the 1830s. They were used to teach students how to draw conic sections, back before we had Mathematica or even full-color textbook illustrations. But these are more literal “models” — for this post, I am talking more ephemeral constructs that are mostly data and equations.

Math models are being used all the time and don’t usually get much attention — until disaster strikes. One type of them that you consume daily is weather forecasting models. When a hurricane threatens part of the world, you see a variety of forecasted paths that the storm is likely to take: each one of those paths comes from someone’s model about past behavior. Another example is building a model to calculate how much flooring you’ll need to cover your room. That one is pretty simple, using additional and multiplication, but still you have to do the math to figure out whether you’ll need 10 or 20 boxes of materials. 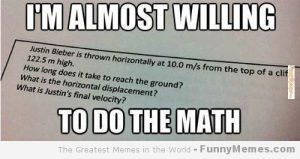 Some of the most annoying math models were those “word problems” that we all had to solve in grade school. Maybe that is why many of us have steered clear of them in adult life. But after taking that modeling class in grad school, I got into math modeling as a career, and went to DC to become a consultant myself. I built models to support public policy decisions, such as whether to build a dam threatening an endangered species (my model said to go ahead, based on the economic outcomes) and whether to enact building energy conservation standards (my model said yes to that too).

Stay healthy and safe wherever you are.

3 thoughts on “The art and science of mathematical modeling”