For the past several years, I have prepared my taxes using the H&R Block software. This year I noticed something different, a series of questions about any cryptocurrency holdings and transactions. Ruh-oh, I thought to myself, those crypto-chickens have come home to roost. The IRS wants its tribute. 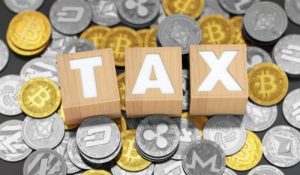 Actually, the IRS has had some ruling on cryptocurrencies for several years, but last fall wrote some new guidelines that have clarified some things and made others more confusing. One of the pitches I recently got from a PR person started off with this line: “The IRS is cracking down on properly reporting taxable crypto transactions, even going as far as issuing tens of thousands of audits.” It was time to get some advice, so I asked my accountant, who does my business tax filings, what was up.

She told me that “Tens of thousands of audits is probably an exaggeration – as they don’t have the manpower. What is probably more likely is that they have sent out many letters to taxpayers” asking for clarification. But not full-blown audits. The Next Web reported last summer that taxpayers got these letters and some were told they owed thousands of dollars in back taxes.

The form that the IRS requires is called a 1099-K, which is what my tax software was trying to figure out if I needed filing. “The IRS has used 1099-K information in audits – although they had at one time said they wouldn’t. I haven’t seen a crypto audit based on a 1099-K. The important thing is – if you have cryptocurrency, do keep track of it. Do  report to the IRS your sales if you’re using it as an investment. And do report your income from it if you’re using it for business. If you have crypto transactions showing up on a 1099-K just make sure you can document what the transaction is.” Some of the coin exchanges now automatically generate an annual 1099-K form, like your mutual fund or IRA operator.

But the problem that isn’t yet solved by the IRS is what happens when your coin account forks because the developers have a food fight and split into two separate coins. This creates what the IRS calls a taxable event and “That means that anyone who forks a blockchain can, without warning or notice, create new tax obligations for every holder of coins on the old chain,” says one coin news site. The taxpayer holding the coin hasn’t done anything to acquire this new asset. That isn’t great, but I think it is somewhat analogous to holding shares in a pre-IPO company. When such a company goes public, those shares are now worth something and that is a taxable event that is outside the control over the taxpayer. Many of you know exactly this situation, and had to sell off your shares to pay the feds during that particular year.

So make sure if you have significant holdings in crypto, you track it when you bought it — or when you got it as payment for services rendered — and when you traded it in for hard currency.

“People don’t seem to realize that Bitcoin was designed as an immutable evidence trail. It is anything but an anonymous system,” says Craig Wright in his blog post here. “If we want to be treated like adults, we need to start acting in such a way and understand that we live in a world of rules.” I agree.