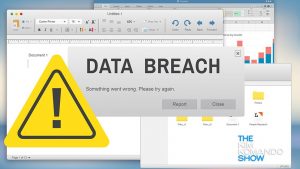 This fall there have been data breaches at the internal networks of several major security vendors. I had two initial thoughts when I first started hearing about these breaches: First, if the infosec vendors can’t keep their houses in order, how can ordinary individuals or non-tech companies stand a chance? And then I thought it would be useful to examine these breaches as powerful lessons to be avoided by the rest of us. You see, understanding the actual mechanics of what happened during the average breach isn’t usually well documented. Even the most transparent businesses with their breach notifications don’t really get down into the weeds. I studied these breaches and have come away with some recommendations for your own infosec practices.

You will notice a few common trends from these breaches. First, the delay in identifying the breach, and then notifying customers.  It took NordVPN five weeks before they notified by their datacenter provider, and they found out the attack was part of an attack on their other VPN vendor customers. “The datacenter deleted the user accounts that the intruder had exploited rather than notify us.”  It took Avast months to identify their breach. Initially, IT staffers dismissed the unauthorized access as a false positive and ignored the logged entry. Months later it was re-examined and determined to be malicious. It took two months for Trend to track down exactly what happened before the employee was identified and then terminated.

Finally, about 4,000 users on a support forum have notified by ZoneAlarm about a data breach. Data compromised includes names, email addresses, hashed passwords, and birthdates. The issue was outdated forum software code that wasn’t patched to current versions. Their breach happened at least several weeks before being noticed and emails were sent out to affected users within 24 hours of when they figured the situation out.

These delays are an issue for anyone. Remember, the EU, through GDPR, gives companies 72 hours to notify regulators. These regulators have issued some pretty big fines for those companies who don’t meet this deadline, such as British Airways.

Second is a question of relative transparency. Most of the vendors were very transparent about what happened and when. You’ll notice that for three out of the four situations I have linked to the actual vendor’s blog posts that describe the breach and what they have done about it. The sole exception is ZoneAlarm, which has not posted any details publicly. The company is owned by Check Point, and while they have been very forthcoming with emails to reporters that is still not the same as posting something online for the world to see.

Third is the issue that insider threats are real. Employees will always be the weakest link in any security strategy. With Trend, customer data (including telephone numbers but no payment data) was divulged by a rogue employee who sold the data from 68,000 customers in a support database to a criminal third party. This can happen to anyone, but you should contemplate how to make a leak such as this more difficult.

Finally, recovery, remediation and repair aren’t easy, even for the tech vendors that know what they are doing (at least most of the time). Part of the problem is first figuring out what actual harm was done, what the intruders did and what gear has to be replaced. Avast’s blog post is the most instructive of the three and worth reading carefully. They have embarked on a major infrastructure replacement, as their CISO told me in a separate interview here. For example, they found that some of their TLS keys were obtained but not used. Avast then  revoked and reissued various encryption certificates and pushed out updates of its various software products to ensure that they weren’t polluted or compromised by the attackers. Both Avast and NordVPN also launched massive internal audits to track what happened and to ensure that no other parts of their computing infrastructure were affected.

But part of the problem is that our computing infrastructures have become extremely complex. Even our own personal computer applications are impossible to navigate (just try setting up your Facebook privacy options in a single sitting). How many apps does the average person use these days? Can you honestly tell me that there is some cloud login that you haven’t used since 2010 that doesn’t have a breached password? Now expand that to your average small business that allows its employees to bring their personal phones to work and their company laptops home and you have a nightmare waiting to happen: all it takes is one of your kids clicking on some dodgy link on your laptop, or you downloading an app to your phone, and it is game over. And as a friend of mine who uses a Mac found out recently, a short session on an open Wifi network can infect your computer. (Macs aren’t immune, despite popular folklore.)

So I will leave you with a few words of hope. Study these breaches and use them as lessons to improve your own infosec, both corporate and personal. Treat all third-party sources of technology as if they are your own and ask these vendors and suppliers the hard questions about their security posture. Make sure your business has a solid notification plan in place and test it regularly as part of your normal disaster recovery processes. Trust nothing at face value, and if your tech suppliers don’t measure up find new ones that will. And as you have heard me say before, tighten up all your own logins with smartphone-based authentication apps and password managers, and use a VPN when you are on a public network.

1 thought on “How to prevent a data breach, lessons learned from the infosec vendors themselves”