When it comes to thinking about blockchains, most of us automatically go to cryptocurrencies like bitcoin and Ethereum and think about money. How much are these currencies worth in US dollars? How much value have they gained or lost recently? It took two financially-related but non-monetary examples that I heard about recently to convince me that I was looking at the wrong part of the elephant. 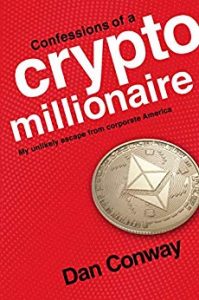 Before I tell you about how I came to this insight I want to talk about the money part of blockchain first. I recently read Dan Conway’s new memoir, Confessions of a Crypto Millionaire. The book is now out, and I would urge you to get a copy and read it. Unlike many business books that quickly run out of ideas and out of steam after the first chapter, Conway’s tale about how he became an early investor in Ether is both a cautionary and celebratory one. You can read my review of his book here, along with some insights from the email conversation we have had over its launch. From these emails, Conway told me about an experiment by the UN with an Indian local land registry in Panchkula. The issue is trying to identify the rightful owner of a plot of land, particularly in the developing world where paper records are scarce or misfiled. The UN has built a registry based on Ethereum smart contracts to create a single source of truth of ownership status and property history. The buyer will be assured that the land being bought is the correct plot, and that the seller is unequivocally its owner. Everyone can see in near real time who owns what, improving accuracy and transparency. The system doesn’t require computer access or Ether wallets and works in the background to support land transactions. Similar projects are underway in title registries the States and in other countries too.

Blockchain technology is being used in another interesting project as part of a new protocol from Kiva.org. I have been loaning money to various developing world entrepreneurs for a decade through this organization which funds millions of dollar-equivalents of such loans. I wrote about Kiva here in 2009 and since then have been active using their platform. Over the years I have funded 54 different people in more than 30 countries and loaned $1400. This was done with a very modest amount of “new money” because I very determinedly loan my funds when the original loans have been paid back. And what is interesting is almost all my loans have been paid back, with less than $30 lost from defaults, although some loans are paid in full but late. The way Kiva works, once you collect at least $25 back from your loan recipients, you can relend it to someone else.

Last year Kiva announced the creation of its own blockchain-based protocol, and last week announced its implementation in Sierra Leone. It will be available to the about 5M adults living there to use as an identity management device, based on their fingerprints to authenticate each person in financial transactions. One of the problems with many unbanked people is that there is no easy mechanism to verify someone who has no credit score, no previous financial history, no anything that you and I would consider part of our financial footprint. That is where the Kiva protocol comes into play. Whether it will work in Sierra Leone – or anywhere else – is still to be seen, but it is an interesting proof of concept. (I have yet to make a loan to anyone there, but you can be sure that I will look for someone to sponsor at the next opportunity.)

Being based on blockchain means there is no central repository of fingerprints that can be downloaded – they are stored in a distributed database that is created individually by each person. That was a hard concept for me to wrap my head around for some reason, but it makes sense when you think about it. It could be possible to decode each transaction to obtain a single fingerprint scan, but whether this could be done on a large enough scale would be difficult. Certainly, it would be a lot harder than just accessing an unprotected AWS S3 database, for example.

We are still in the brave new world of blockchain, to be sure. Expect to see other innovative ways to use identity and distributed databases in the future that have nothing to do with the bitcoin exchange rate. We certainly live in exciting times.