If you have an Alexa or Google Home nearby, you probably already know how handy it can be to help your life. But what you may not be as aware is how businesses are adopting voice-enabled information access, and how this technology could become as revolutionary as HTML and websites were back in the 1990s.

I got to see some of this future at the Prepare.AI conference yesterday here in St. Louis. In particular, a presentation by Bob Stolzberg, the founder of VoiceXP, a two-year old startup that is beginning to make some noise with a voice toolkit that is aimed at business. At the show, Bob demonstrated a couple of examples, using an Alexa as his speaking partner. 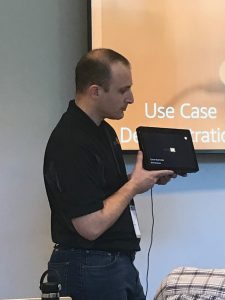 One was an app developed for Mercy Health, so you can locate the nearest doctor with just a few commands (Say “Alexa, Start Mercy”). Another was for a law firm, so you can use voice commands to find a lawyer after you have been in an auto accident. One app showed how an executive could easily get various business metrics reported via voice, rather than plowing through a bunch of spreadsheets. One for a scientific research company allows their researchers to add experimental notes via voice commands, so they don’t have to remove their gloves and type them in. “Businesses are adopting voice apps to start their conference calls, to integrate with Slack as replacements for front-desk check-in kiosks, and numerous other apps. We are living in a voice-enabled world,” he said at the conference. They have a few demos on their site with apps that they have built for other companies as well.

The Mercy app was a significant effort, taking a good-sized team working over several months and a pretty substantial budget to put it together. That experience got them working on a much easier path for developing business voice apps so that ordinary folks could build them without a lot of programming or systems integration knowledge. They call it their Voice Experience Platform. They are still in beta but nearing its launch with several different plans that include managed services hosting, custom lead gen features and help with on-boarding the apps. They also provide a voice marketing plan that teaches business how to successfully market their new voice experience.

Voice-enabled apps do have their downside, namely a threat to our privacy and potential misuse by bad actors. Given that the Alexa/Home device is always listening, this data could be captured or subject to a man-in-the-middle attack without the proper security posture. VoiceXP has security built into its platform, which is encouraging. “What if a rogue device shared confidential medical data,” asks Adam Levine, a privacy expert. “These new technical advances may make our lives easier, but we need see a greater focus on privacy.”

Another issue is that to voice-enable your corporate apps, you need someway to access them programmatically. That could be trouble: with one of their customers, VoiceXP ended up using a complex spreadsheet and pulling data directly from that into their platform.

Finally, voice apps touch many different parts of your organization, similar to how web apps did when they were first created back in the day. You will need to keep an open mind, build your team accordingly, and empower them to collaborate to formulate best practices to make them work successfully.

If you have examples of your favorite business-related skill or action (as these apps are called), do share them in the comments.