The short answer is yes, and we explore the various dimensions of The Facebook Problem in this week’s podcast. First we touch on the swirl of commentary about Zuck’s latest pronouncement that the company will combine Facebook Messenger, WhatsApp and Instagram into a single, unified product. Is there a business model in there somewhere, or is this just wishful thinking? Some analysts have already said that the era of Facebook’s News Feed is now officially over. We aren’t so sure, but we agreed that Facebook has become mostly a waste of time. There are some other business-oriented networks that we think have more value, including Reddit, Quora, LinkedIn, Alignable and Spiceworks. We’ve found all to be more fertile hunting grounds for business marketers. We also have advice about how to choose and test among those sites.

We recorded this episode just before Brian Krebs revealed that Facebook exposed hundreds of millions of user passwords to more than 20,000 employees for years. It is certainly a sad state of affairs.

One final thought about Facebook: Reuben Arnold, Starbucks’ vice-president of marketing and product in EMEA, said he wants to  have deeper conversations with some of its customers and promote its brand using private groups and private accounts on social media channels. Maybe this is an alternative to just posting to the greater universe. We’ll see.

But wait, there is more. We like this post about whether it’s time to go back to taking notes with pen and paper. How many of those people tapping away on their laptops during a meeting are doing something related to the meeting? You know the answer. Maybe it’s time to ban the laptops and aim for shorter meetings instead.

We also discuss a recent news item about how execs from the UK-based convenience store Tesco are frustrated that the company is having to spend an increasing amount of money on ensuring its advertising doesn’t appear next to inappropriate content and believe publishers should foot more of the bill. It used to be that publishers protected their advertisers from this kind of embarrassment, but in a world dominated by algorithms, anything goes. 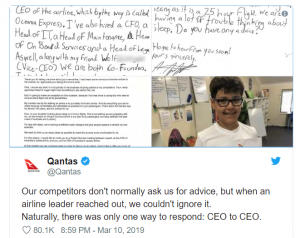 Finally, there was a charming story earlier this month about a handwritten note to the CEO of Quantas from a 10-year-old boy who wanted to start his own airline. The airline posted the kid’s letter and a welcoming reply from CEO Alan Joyce, who commented, “Our competitors don’t normally ask us for advice, but when an airline leader reached out, we couldn’t ignore it.” The story is more than charming though: it is a lesson about how a light touch and a sense of humor can go a long way towards promoting your brand, in this case to the tune of nearly 30,000 retweets.

You can listen to our 19 min. podcast here: