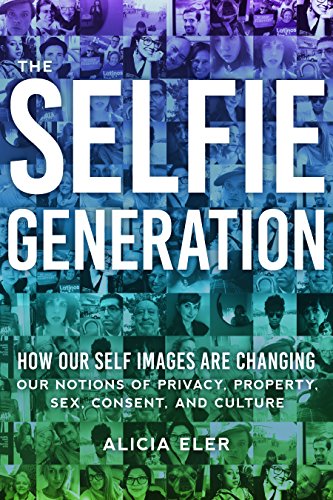 Alicia Eler once worked for me as a reporter, so count me as a big fan of her writing. Her first book, called The Selfie Generation, shows why she is great at defining the cultural phenomenon of the selfie. As someone who has taken thousands of selfies, she is an expert on the genre. Early on in the book she says that anyone can create their own brand just by posting selfies, and the selfie has brought together both the consumer and his or her social identity. The idea is that we can shape our own narratives based on how we want to be seen by others.

Do selfies encourage antisocial behavior? Perhaps, but the best photographers aren’t necessarily social beings. She captures the ethos from selfie photographers she has known around the world, such as @Wrongeye, Mark Tilsen and Desiree Salomone, who asks, “Is it an act of self-compassion to censor your expression in the present in favor of preserving your emotional stability in the future?”

Are teens taking selfies an example of the downfall of society? No, as Eler says, “teens were doing a lot of the same things back then, but without the help of social media to document it all.”

She contrasts selfies with the Facebook Memories feature, which automatically documents your past, whether you want to remember those moments or not. She recommends that Facebook include an option to enable this feature, for those memories that we would rather forget.

Eler says, “Nowadays, to not tell one’s own life story through pictures on social media seems not only old-fashioned, but almost questionable—as if to say ‘yes, I do have something to hide,’ or that one is paranoid about being seen or discoverable online.”

Eler mentions several forms of selfies-as-art. For example, there is the Yolocaust project, to shame those visitors to the various Holocaust memorials around the world who were taking selfies and make them understand the larger context. And the “killfie,” where someone taking a picture either inadvertently or otherwise dies.

This is an important book, and I am glad I had an opportunity to work with her early in her career.