My sister and I visited Bialystok, in NE Poland, as part of our discovery trip in the spring of 2017. Here is my report.

Our grandfather’s family comes from a small town about 20 miles from there. Luckily for us, he left before the outbreak of WWII and raised his kids in America. I tried to find out more information about his town (Zambrow) and get someone to show us around, but I wasn’t successful. So going to Bialystok was the next best thing: the town of about 300k people is famous for two of its residents who were the inventors of Esperanto and the polio vaccine. It has enough of a tourist infrastructure — but barely, especially for American Jewish tourists. More on that in a moment. It is a two hour train ride from Warsaw and the trains operate frequently, which is how we got there.

But it is a study of conflict, and that is an interesting part of our trip and could be part of your own, should you decide to go there. It is absent of the big-ticket items of Warsaw and Krakow that attract thousands of tourists. But it also absent of many of the things that an American Jew would want to see from the wartime years: the city was heavily bombed and the Jewish districts pretty much obliterated. The city once had Jews for half of its population: now there are almost none.

So the challenge of visiting someplace is understanding its history, and understanding the various layers of the city that you don’t see, along with the ones that are part of the modern fabric. Part of travel is discovering these new places and how they weave the old with the new. One of the reasons why I am drawn to Europe is that the old is very old, and the new is often very new. The contrasts are interesting. You see centuries-old structures next to new shopping malls and restaurants. Or renovations that incorporate both new and old in interesting and clever ways. 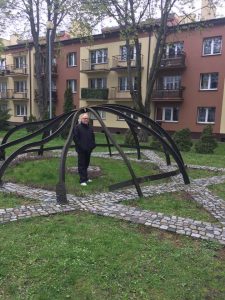 Let’s take as one example the Great Synagogue in Bialystok. It was built in 1913, replacing another structure on that spot that dated from the 1770s. In 1941, the Germans entered the city, rounded up 700 Jews, and brought them there. They then fire bombed the place, killing everyone inside and destroying the building. Here is a picture of me standing inside a replica of what was left of one of the domes of the building. You can see me standing in a parking lot, surrounded by a set of apartment blocks that were built in the 1950s.

It took us over an hour to find this memorial, even though we had all sorts of maps and brochures that mentioned it. And that is the conflict of Bialystok: yes, they did honor this terrible moment in their history. But it is almost an afterthought now, and that is sad and frustrating. Another former synagogue is now the HQ for the Esperanto society, which is somehow a fitting adaptive reuse. Their grand palace that was built in the 1700s was destroyed in the war, rebuilt in the 1950s by the Russians and is now their medical school. Again, somewhat appropriate reuse. But the difference is the palace is still palatial, and the grounds remind one of the grounds around many palaces, such as Versailles. The Great Synagogue was never rebuilt, and the memorial stands surrounded by parking spaces.

If you want to see more, here is a brochure for Jewish sites in and around Bialystok. But here is the problem: the brochure is several years old. Many of the sites mentioned in the guide don’t exist, have been significantly changed, because as I said there aren’t many Jews there now.

Should a Jew visit Bialystok? Yes, certainly, if you are interested in seeing these sorts of things. The restaurants are extremely cheap and good, the people friendly, the town square is lovely and there are numerous festivals that add lots of charm to the city. (We stayed in an excellent AirBnB BTW that was steps from all the major center-city attractions.) But be prepared to look long and hard to find the evidence of the past that connects our shared heritage.

3 thoughts on “Conflicted over Bialystok”