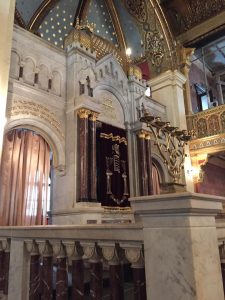 Krakow once had a very vibrant Jewish Quarter where tens of thousands of Jews lived before the war. Now there are virtually none, as in many other Polish and European cities. But their presence is very strongly felt: there are numerous synagogues within a few blocks of each other (this one shown here was used by the Nazis as a stable during the war), and remnants of places where they lived and owned businesses. That area of the city isn’t as renovated as other parts, although it does seem to be making a comeback.

My sister and I visited Krakow in the spring of 2017. If you go, you can choose to tour the city independently (which we did) or join one of the numerous tour groups that walk you around the city (which you can easily tag along). Krakow is the home of Oskar Schindler’s actual metalworking factory and is now a museum.  The factory which was featured so famously in the Speilberg movie is actually across the river from the original Jewish quarter. (BTW, Schindler had a second factory which is also being turned into a museum in what is now the Czech Republic).

If you go to the Krakow Schindler museum, go early especially if you want to see the place and have time to go your own pace. The problem is that the rooms are small, and the crowds large. It is well worth the visit, well curated with lots to read and videos to watch.

Be warned though that most of the place isn’t about Schindler, which I think is a good perspective. Instead, you see the progress of the war through Krakow and how they treated many of the residents subsequently. The exhibits document the original invasion of Krakow by the Nazis in the early part of WWII and how quickly they established control over the city and created the Jewish Ghetto. The number of artifacts from the wartime activities, the photos of both Polish and Germans involved, and street scenes was all overwhelming. I particularly liked the art projects that were created as contemplative spaces, and reminded me of the large Serra sculptures that put you inside of them.

The couple of rooms that documented the life of Schindler are also interesting.  What I learned is how he is a very complex person, that you may not have gotten the first time you read the book or saw the movie. Yes, he saved 1200 Jews and was honored for that later in life, well before the movie came out. (He died in the 1970s.)  But he wasn’t saving Jews just because he had a soft spot for us: he wanted free labor and wanted the profits. Granted, he spent the vast majority of his firm’s profits on bribes to keep his workers alive later on in the war.

He was also an entrepreneur but not a very good one. Almost all of his businesses eventually failed. He was a Nazi spy, joining the German intelligence agencies early on and spying against his fellow Czechs. He was arrested numerous times and barely managed to escape death himself. And he was a rogue, interested in wine, women and having a good time.

But it turns out understanding Schindler is a good entry point to learn more about the wartime era and its complexities. Many people were semi-complicit in terms of outwardly supporting Nazi policies but personally affected by helping to save Jews. Many profited by the wartime business, only to donate vast sums of money to Jewish causes and reparations or philanthropy. It is important to see the shades of gray here. 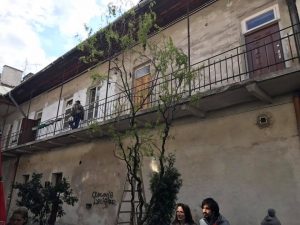 One tour guide told us that the Spielberg “Schindler’s List” movie (here is an alley that was used in the movie) was a big economic engine that began in the mid-1990s after the movie came out. While it has taken time for this development to get started it can be seen as a lot of construction is happening and the original Jewish Quarter of Krakow now has a solid bar/club scene which is always a sign that the neighborhood is on the way up. At the local flea market, one table was filled with Nazi memorabilia. Not sure if genuine or reproduction, but either way somewhat unsettling.

If Krakow has any downside, it is because it attracts too many tourists and the infrastructure just can’t support the hordes. The vast majority of tourists come there as part of groups and so the big attractions, such as the salt mine, Schindler’s factory and Auschwitz have to cater to them, leaving little opportunity for independent travelers such as Carrie and me to get in and maneuver around them. I guess this is a good problem to have but it means if you want to see these sites you need to plan a lot further ahead than we did.

1 thought on “What Schindler represents to us today”