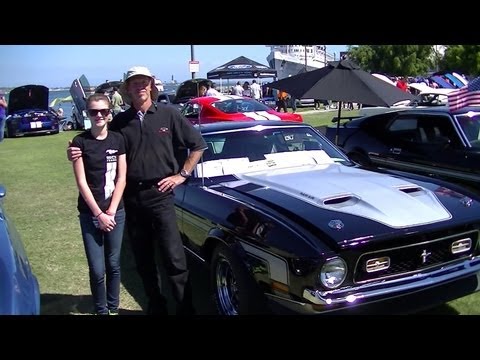 Rich and Amy Hansen and their 71 Mustang

It is ironic that I found myself enjoying “A Faster Horse,” a recent movie about the making of the 2015 model Ford Mustang directed by David Gelb.

I am not a car person: I view a car as basic transportation and not a statement about my lifestyle or whatever. But the movie shows how hard it is for businesspeople to collaborate on complex projects, such as designing a completely new version of the classic American muscle car that has sold more than nine million units over its 50 year tenure.

Too often those of us deeply steeped in high tech forget that the industrial revolution happened many years ago and people were collaborating without emails, Sharepoint, the Internet, or What’s App. While the folks at Ford have all of those tools and more, what is interesting is Gelb’s perspective on how the various work teams had to pull off this major redesign. You see the early sketches on paper, computer modeling, clay models and then the various factory pieces coming together with the 2015 Mustangs ready to sell last fall.

Speaking of car sales, wanna guess how much that first 1965 Mustang went on sale for? The answer is at the end of this post.

There were several scenes in the film that were my favorites. One is a meeting to deal with a crisis: the drivetrain parts are off by one millimeter, and this gap is making the car not very reliable and not very drivable. The team gets together for a meeting to try to close the gap: meanwhile the production line is stalled until the work around can be implemented. This is collaboration at its best. What is amazing is how this small a gap could have torpedoed the entire project.

There are lots of meetings around the speakerphone as the engineering team tries to figure out ways to shave weight and increase fuel economy, all while adding styling and new features to the 2015 model. They are actually pretty interesting, even for this non-car guy. Again, it is all about working together to solve the particular problem. At one point, one of the engineers isn’t happy that some issue would have been fixed by spending $1.34 per car. This doesn’t seem like a big deal, until you realize that Ford will be making hundreds of thousands of Mustangs, and this $1.34 increase is taking a lot of profit off the table down the road.

My favorite other scenes are about this father-daughter team Rich and 13-year old Amy Hansen. Over the past four years, the two worked on renovating a classic 1971 Mustang (pictured above) and have it finished just in time to drive it across country to the new Mustang launch party in North Carolina. I was jealous of them not because they produced a beautiful car, but because the kid really knows her stuff and was deep into the project. Again, this is another useful note on collaboration. Certainly, there are many dads of teens that wouldn’t even consider working with their daughters on classic cars. Now this kid has some solid skills even if she just uses them to change a tire and oil.

If your startup is going to host a movie night, consider this flick. It shows you what is needed to pull together and produce a great project, even if it is a car.

By the way, that 1965 Mustang sold for somewhere around $2,750. The restored classic cars are now going for $30,000 or more in good condition. Even accounting for 50 years’ worth of inflation that is a pretty good investment.