When new technology enters the marketplace, there can be major disruptions to the way that our existing legal system was constructed with the older incumbent technologies in mind. Such is the case with Uber, Lyft and the other ride sharing services. The legal battle is with the metropolitan taxi commissions that want to protect the incumbent taxi companies.

I am reminded of the events of the late 1990s, when competitive DSL carriers wanted to enter the Internet access market and were blocked by the local phone companies. The first order of business for these DSL carriers back then was to deploy lawyers at the various state capitals and argue before the public utilities commissions that their services were legal and worthy. Many of these new carriers had to fight tooth and nail to get their gear allowed inside the local central phone offices. Often, the incumbent phone companies would say they ran out of room to house the new guy’s equipment. Yeah, right.

Fast forward to today, and companies such as Covad and Rhythms – the ones with all the lawyers running around the countryside — are long forgotten. We now get our DSL service mostly from Ma Bell. Ironic, isn’t it? 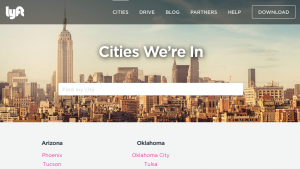 The same thing is happening with the ride sharing services. Sue now; figure out how to implement later. Here in St. Louis these services are still illegal, and while things aren’t as bad as in Paris, it is still very messy. Last week we had in the span of a day an offer by Uber to provide free ride-shares for the holiday weekend. This offer was quickly withdrawn when the taxi commission said whether they are free or not, the drivers still need permits issued by the commission.

Last week in Paris, the taxi drivers staged a protest stopping traffic and burning tires over the UberPop service, which is about half the cost of the more typical UberX service that is its most popular service and uses registered drivers. The French are always good for labor strikes, and have taken things a step further by indicting the two local Uber managers for breaking their laws. Uber is available in more than 100 cities in the USA and in 57 countries, Lyft in more than 50 US cities. Some of these cities only have the Uber Black (akin to a private limo) while others have the cheaper UberX. It is confusing because Uber refers differently to its various services depending where they are offered, in an attempt to game the legal system. Maybe it is time to hire some of those DSL telecom lawyers that haven’t had much to do over the past several years.

I have not yet used any of the ride sharing services, but know many friends who have and are quite upbeat on them. They have their advantages in that you can see how far away your ride is on your phone, and in some countries the taxi commission has added a 15-minute wait time no matter how close they might be to level the playing field. Even so, it is like have a private driver without having to pay through the nose for one.

The sharing services get around the driver registration system with a two-way rating system: drivers rate passengers, and passengers rate drivers. This is a key element of their service: while there is some log-rolling (you rate me highly and I will do the same for you), it does tend to weed out the worse elements of both. Imagine if the incumbent taxi companies had something similar, our cabs would end up looking like Japan’s that are spotless.

The sharing services also have their disadvantages. They make use of surge pricing, so popular times, such as holiday evenings, cost more. You also don’t know the final cost of your ride until you leave the car, unlike a traditional taxi where you know while you are still in the car. And if you want to use multiple services, you need to download an app for each one to your phone.

Back when DSL was first founded, we had 17 different varieties and speeds and feeds of the service. No two were compatible, and consumer confusion was significant. (Here is an article that I wrote back in 1999 that describes the situation.) Now I just call AT&T and order U-Verse and tell them how much I want to pay a month.

The same thing is happening with the ride sharing services. The early days (say in 2012/2013) saw many cities initially ban them, then eventually allow them. The taxi commissions around the world will continue to block these new technologies under the mistaken mandate of protecting their citizens. But eventually things will change: we will have multiple ride sharing vendors, all offering some confusing array of services, and eventually they will be incorporated into the incumbent taxi companies, if they can see the future properly. Or maybe Google will end up owning all of them and substitute driverless cars instead. Their Waze subsidiary is already planning to roll out ride sharing in Tel Aviv later this year.