One of my favorite moments from Psych 101 (apart from playing with my lab rat in the Skinner box) was learning about Maslow’s level of needs hierarchy. 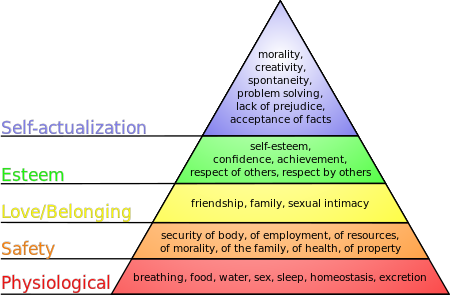 Maslow came up with the idea that all of us start out with needing basic things, like food and shelter. As those needs get satisfied, we move on to others, until we get to the top of the scale, which he calls self-actualization. This is the ability to accomplish whatever one can, like the US Army says where you can be all that you can be.

I started to think what that would mean for cloud computing (I know, I am a total nerd). What would a completely actualized cloud look like?

There is a great analogy if you think about it. As IT departments move into the cloud, they start off with basic services, such as file transfer, email, and simple storage. As these needs get satisfied, they realize that they can put more and more stuff into the cloud, and start running applications, doing offsite backups, handling more hybrid situations between cloud and on-premises servers, and so forth.

Of course, psych 101 breaks down here a little bit. Not every IT department goes through the hierarchy the same way. Some stop at one level or another, because they have saved enough money with their cloud, or have other obstacles that they can’t necessarily remove to go further. Some have heavy legacy data center investments that they can’t rid themselves from. You get the picture.

But then there are some organizations who are born straight to the cloud, without having ever run their own data centers and can design a more actualized environment for their clouds. In a report that I am working on for Gigaom, I am talking to quite a few of these enterprises. They span the gamut from the smallest startups to multi-billion dollar corporations. Some are 100% “cloudy’ while others are moving quickly in that direction.

With one IT manager that I spoke to, he referred to the people espousing the old way of doing business as “server huggers,” which I thought was a great characterization, recalling certain environmentalists of my past. When I was toiling in the IT fields back in the olden days, we referred to the mainframe-centric folks as “mfers” which I am sure is going to move this essay right into numerous spam filters but I couldn’t resist.

The point, and this goes back to psych 101, that just because you are actualized doesn’t mean all your friends (or work colleagues) are, and you have to deal with the fact that their needs are most basic.

But my other point from my research is that I don’t know of too many companies that are reducing their cloud footprints or building bigger data centers to recapture some of their cloud servers. The cloud just makes sense on so many levels, and lights up so many places on the Maslow cloud pyramid.