You wouldn’t know it, but within a short walk of each other in Dearborn, Michigan are two destinations that are important to documenting the span of the American industrial era. I managed to visit them both on my trip to see what Ford is doing in June (read more about that here). 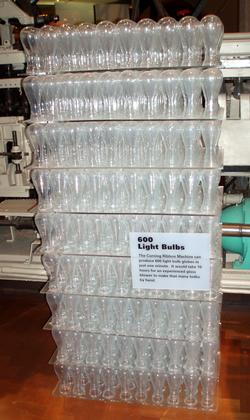 My first stop was the Henry Ford Museum, which I last visited many years ago. Ford was an unbelievable collector of Americana. At his museum is housed an impressive array of objects including Bucky Fuller’s Dymaxion house, Thomas Edison’s original laboratories and home, Edgar Allen Poe’s writing desk, a machine that made thousands of glass casings a hour for lightbulbs built by Corning in the 1920s, the original bicycle shop and home of the Wright brothers where they built their first airplanes, the Logan County courthouse where Abe Lincoln once trod and so much more.

Edison’s laboratories and the Wright bike shop are notable in how all the equipment that needed moving parts ran off a common drive train that was mounted on the ceiling and attached via long belt loops. This was before electricity – something that Edison had a part in – and when just a small collection of tools could produce just about anything made out of metal or wood. (No plastics back then.) There is a sparse but determined sense of purpose around these early machine shops that I found very appealing.

Leave the museum, take a short walk down the block, and you are transported to the modern era at the TechShop. This is a machine shop for everyman, but unlike the Edison labs it is crammed full of gear and tools of all shapes and sizes. I had heard about these places – three of which are in the Bay Area – and this was my first chance to see one. Basically, you sign up and pay a monthly fee of $100 and start taking classes in how to use the gear. And the gear is impressive: there are laser-cutters, metal working equipment, sand blasters, plastic molders and shapers, computer-driven things that I couldn’t even begin to describe. Anyone, once trained, can use anything in the shop. There is even a three-D printer that was built out of spare parts (from a design first run in Make magazine several years ago) that was producing some small models.

I heard from Mark Hatch, the CEO of the TechShops, talk about some of his members who came, invented, and now are making lots of dough with their creations. Patrick Buckley was just some random person who came in to the TechShop to take three of their classes. “Ninety days later, his company had hit one million dollars in sales, producing bamboo-based iPad covers.”

Items of all shapes and sizes are being worked on, and the place is just huge. We got to see a high-pressure water jet cutter that can precisely cut through six inches of sold steel do its thing. Hatch has said elsewhere: “The welding class is really cool. You arrive, put the glasses on, put this big huge leather jacket and leather gloves on, and pretty soon, you’ve got a flame as bright as the center of the sun right in front of you. You’re dealing with fire and gas and steel.”

Ironically, Jim McKelvey built the first prototypes of his Square payment device at one of the California TechShops. He got the idea when he was trying to find a better way to sell all of the hand-blown art glass he created in his St. Louis factory. So we have gone from a machine that transformed the glass industry to one that has transformed the payments industry.

TechShop represents another beachhead for American manufacturing, as John Markoff reported last week in the Times. Companies are shifting their production back to America for a variety of reasons, and he notes a new Google hardware product that is designed and made in America.

It was quite a trip: from where the original light bulb went off to where lots of virtual lights are going off in the minds of modern inventors. You can see how the industrial era progressed when skilled machinists were rare and specialized machines were invented for large mass production to the modern era where skills are easily acquired for small-scale entrepreneurs to make their dreams turn into cash. A true study in contrasts to how we can still make things in America.

(And you can see more of my pictures that I took on my visit on Pinterest here.)

0 thoughts on “The return of the American Industrial Revolution”